Friday 9/11: Wanted to look for a morning flight path in Concord but was slow moving and it was a bit dark, so went to Great Meadows. Seemed quiet but a Sanderling appeared on the mudflat, #200 here (finally)! It wasn’t cooperative, but good enough.

Saturday 9/12: Tried Old North Bridge but no flight in evidence (but other reports of none meant it wasn’t necessarily the site). Couple Purple Finches the best there. Went to Hanscom next. Somehow no RB Nuthatch and the probable Mourning got away before I eliminated Connecticut. Hobbs Brook had the usual, Waltham St. had a Savannah and 3 ravens.

Sunday 9/13: Did the patch on foot for the first time in a few months. Unfortunately a very slow day. Buckeye at BBN along with FOF Blue-headed Vireo was about it. Gave up before I made it to Rock Meadow.

Monday 9/14: Only had time for a quick check of Watertown Square and just to the east and found nothing.

Tuesday 9/15: Gave Old North Bridge another try, no flight evident again. Did have a kestrel, harrier, and FOF Lincoln’s Sparrow. Checked Hobbs Brook after, usual shorebirds and a Philadelphia Vireo.

Wednesday 9/2: Hobbs Brook had a Prairie, a couple towhees (finally for the local ‘commute’) and the usual shorebirds.

Thursday 9/3: Nothing exciting at Dunback.

Friday 9/4: Tanager, Red-shoulder, Purple Finch at Rock Meadow, nothing at the duck ponds.

Saturday 9/5: Went out to Watatic. Five loons at Fitchburg Res on the way out. Good warbler show on the way up including 4 Tennessee plus a cuckoo and a few other things. Hawkwatch was slow. Shadow Darners but nothing better on the way back down.

Sunday 9/6: Horn Pond was pretty busy, Olive-sided the most interesting. No egrets though. Turnstones on Magnolia Beach later among the usual stuff.

Monday 9/7: Thrasher at Danehy. Nothing much at Draw Seven and Earhart (75 Semipalmated Sandpipers, RE Vireo). No parking by Point of Pines, nothing at Belle Isle, still no parking at Point of Pines.

Tuesday 9/8: Found the flock of warblers that the Golden-winged was with the other day at Dunback but it wasn’t among them. Also Veery, not too much else.

Wednesday 8/26: Least Flycatcher at BBN, bit disappointing otherwise. Red-eyed Vireo still feeding young was interesting, otherwise redstart and the usual shorebirds. Quick stop at Hardy Pond since I had to loop around had 2 kingfishers chasing each other.

Thursday 8/27: Figured Simon’s Lark Sparrow was long gone from Pine Hill but Kaveski and Meriam’s would be worth a try. Tons of House Finches, Mourning Doves, and a good number of Bobolinks but not much else. Wasn’t thrilled to see the nearby reports later.

Friday 8/28: Thought about Great Meadows but ended up at Hobbs Brook again. Semipalmated Plover for the ‘commute’ finally, 9+ kingbirds, and Least Flycatcher was #180 for the res area, and not too much else.

Saturday 8/29: Figured the storm would make for something at Great Meadows. Very little for the first hour or two, but eventually had a bit with Cliff Swallow, Pec, Semipalmated Plover, and bittern plus harrier and snipe. Quick pond loop after had nothing as the rain got heavier.

Sunday 8/30: Got a space at Deer Island. Very little in the trees, not too much on the water either. Seaweed bed at the tip had a bunch of shorebirds including 4 Ruddy Turnstone. Went towards Point of Pines after but the tide was too high. Same at Draw Seven, so went to Habitat to look for the GW Warbler. No luck with that or much else birdwise but 4 species of darner included a Swamp.

Monday 8/31: Back to Habitat. Had to leave before the GW showed up but had first of fall Magnolia and Parula among 7 other warblers. Pileated flying along Concord Ave on the way home.

Wednesday 8/19: Falzone and West Meadow were fairly quiet. Hummingbird around the yard in the evening.

Thursday 8/20: More or less the usual at Hobbs Brook, Prairie, 3 Hoodies among the most interesting. Red-spotted Purple in the yard was new for the yard.

Friday 8/21: Quiet at Watertown Square, 5 minutes at the duck ponds had the usual sandpipers.

Saturday 8/22: Attempted a south shore loop. Squantum marshes had lots of peep but all in the sun. Too many cars at Squaw Rock. Went to Scituate Reservoir but looked like parking was all roadside and busy traffic, so gave up. Great Pond still had high water. Grebe was still at the res, Peregrine at Hobbs Brook (but no night-heron).

Sunday 8/23: Quick check of Nobscot had not much. Hager Land and Have Not Pond in Boxborough had the usual birds, got a decent number for the town list. Drive by off Hobbs Brook had a couple Lesser Yellowlegs.

Monday 8/24: Construction meant Hobbs Brook was the easiest place to hit. Egret and one night-heron at the Mill St marsh, couple Semipalmated Sandpipers among the Leasts, and a flyover Pileated.

Tuesday 8/25: Zabulon Skipper and lots of kingbirds at Dunback. Five nighthawks over the house later.

Wednesday 8/12: Broad-wing at Rock Meadow, couple Least, 5 Solitary, a Black-and-white, and a waterthrush at the Duck Ponds.

Thursday 8/13: Least, Solitary, Spotted, lots of Killdeer plus an egret and patch tick Pileated finally at Hobbs Brook. Nothing at the res.

Saturday 8/15: Not much at Pelham Island Rd or Nobscot. No terns, the interesting small gulls at Wachusett were too far out. Marsh Wren and Lesser Yellowlegs were Worcester county birds at Sterling Peat. Too cloudy along the Nashua for odes. Semipalmated Plovers at Hobbs Brook.

Sunday 8/16: Nothing of note but lots of birds at Sandy Beach. Pretty quiet at Earhart, a small flock of peep got away. Afternoon wander of Merrill’s neighborhood in Magnolia had a Bank Swallow among other things.

Monday 8/17: Virginia Rail, Bobolink, not too much else at Great Meadows.

Wednesday 8/5: Quick check of the res and Flint’s had nothing, so rushed out to Wachusett. Also Worcester county Snowy Egret and Bonaparte’s Gull.

Thursday 8/6: Prospect Hill was very quiet but a Red-shoulder was apparently new for the park list. Didn’t see any Red-bellied Tiger Beetles in a quick check.

Friday 8/7: Young eagle and a Vesper Bluet about it at Forest Grove.

Saturday 8/8: Nothing much at Nahanton. Bunch of Semipalmated Plovers the best at Millennium. No parking at Ponkapoag which is where I actually was trying to go, so eventually ended up at the Charles River Peninsula which was quiet.

Sunday 8/9: Hobbs Brook was fairly quiet but a bit of mud is starting to show up. Nothing too exciting at Hanscom either. Cranberry Bog was quite slow, good tiger beetle show but little else.

Monday 8/10: Nothing exciting at BBN.

Tuesday 8/11: Gnatcatcher was a migrant at Dunback and Bobolink was a Cambridge Region pre-work year bird.

Glad at least one pelagic came close enough and stuck around. 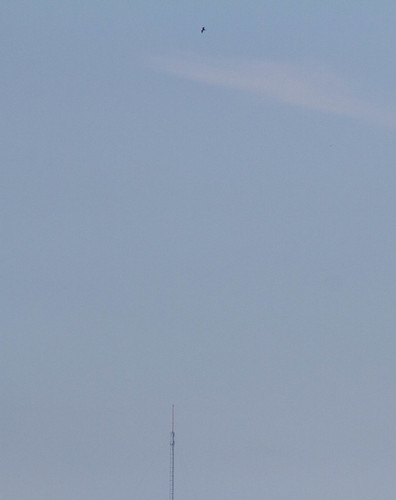 Wednesday 7/29: Had to stop by Habitat so walked around a bit. RB Nuthatch along the road and the goats were about it. Solitary at the duck ponds after.

Thursday 7/30: White-throat was a real surprise at Dunback, my first in July.

Friday 7/31: Nothing at Falzone, which left enough time to check Hardy (nothing) and the res (PB Grebe was back, which means 140 up for the Cambridge region pre-work list).

Saturday 8/1: Quick check of the parkway marsh at BBN had a few sandpipers. Draw Seven was quiet. Debated skipping Earhart but decided it was right there, so pulled in. Headed towards the casino side and noticed a whiter-looking gull where the mud would be if it wasn’t high tide. Worked around to get a better angle and it looked pretty good for a white-winger and Glaucous on size. Eventually flew over the dam (more or less got flight shots). Doubled back pretty quickly and got some much better views. First “inland” summer record for the state as far as I can tell (and there’s only one other nationally with a quick eyeball of the ebird map). Continued to Belle Isle, which was a waste (less so than looping Winthrop and Revere Beaches and finding no parking first).

Sunday 8/2: Finally got the central-ish MA swing in. Whitehall Res had one loon but no chicks visible. Hummingbird and eagle the other birds of note. Next was the Cedar Swamp in Holliston. Trail cleared a bit since I was last here. Too cloudy for odes unfortunately, Lilypad Forktail the most interesting (so not very). A few birds, nothing much there either. Looked for a spot in Ashland to stop but didn’t find anything worthwhile, so continued to Pelham Island Rd. Single Spotted and Solitary on the river was about it.

Tuesday 8/4: Regular shorebirds at BBN, nothing much else. All the Sooty Tern reports came in just as I finished work for the day so ran over to Cambridge Res. No terns but 3 yellowlegs and 3 dowitchers were nice (dowitchers especially since they were res #178 and Waltham #221).

Thursday 7/23: Too humid, family of Cooper’s at West Meadow, nothing at the duck ponds.

Saturday 7/25: Usual at Horn Pond, still just one Solitary at BBN. Monarch up in Gloucester.

Sunday 7/26: Heard Farm had a flyover ibis among other things plus a few Monarchs. Nothing new at the bridge. Blair Pond looked like the water level was up. Nothing at the res.

Tuesday 7/28: A few more of the common shorebirds at BBN plus a hairstreak.

Wednesday 7/15: Fairly quiet at Great Meadows, although a few GW Teal were my earliest fall arrival.

Friday 7/17: Errands and rain. Quick run along the Charles in Watertown had nothing. Very quick stop at the duck ponds had a high Osprey.

Saturday 7/18: Should have gone inland today but made a Squantum run. Stilt Sandpiper was almost the closest bird in the pans and an ibis flew over. Fairly quiet otherwise. Nut Island was dead. Quick scan of Wollaston didn’t have the Piping Plovers but I wasn’t going to search if they’ve left the enclosure. Fish kill by Earhart meant 600+ gulls, nothing interesting among them.

Sunday 7/19: Hop Brook and the Desert didn’t have much for interesting bugs. Stopped at Pelham Island Rd on the way home and had a singing marsh Wren. Mud flat at the river looked good but nothing beyond a Killdeer on it. Pied-billed Grebe at the res was interesting too.

Monday 7/20: Too steamy at Dunback, basically nothing but robins.

Tuesday 7/21: Solitary at BBN was about the only new thing.