Wednesday 1/13: GW Teal and a Wood Duck by Watertown Square, eagle but no interesting waterfowl at Mt. Feake.

Thursday 1/14: Quick buzz of Nine Acre had nothing, walked St. Anne’s a bit and had a few things of minimal interest.

Friday 1/15: Odd finch call at BBN eventually turned out to be a Pine Grosbeak (‘commute’ 237, patch 186)! Also had 2 Yellow-rumps and maybe some crossbills plus a flock of grackles on the way over.

Saturday 1/16: Waited for the rain to stop (or thought I did), then ran to Draw Seven. Found the scoter flock (11 Surf, 1 White-winged) and eventually the Black on the other side of the dam plus a few redpolls. Thought about Sylvester Baxter but no close spaces so went to Station Landing instead. A few Ruddy and more redpolls plus more of the same ducks (minus the scoters). 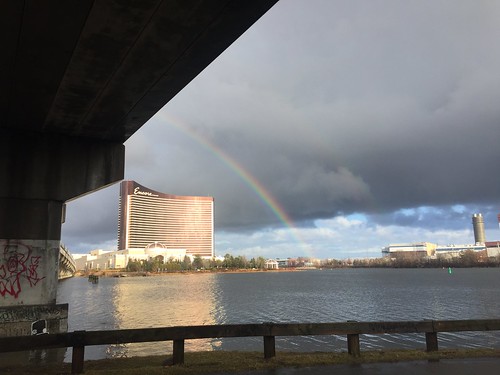 Sunday 1/17: Got the Fox Sparrow at Horn Pond but other than 50+ coots there wasn’t too much else.

Monday 1/18: Gadwall and the pintail were at Arlington Res, bluebirds at Cambridge Res.

Wednesday 1/6: Falzone and West Meadow had a Ruby-crowned Kinglet (calling only).

Thursday 1/7: Redpolls at Cookson and by the pool in Watertown, not much else along the river or at Gore.

Friday 1/8: Ring-necks and the usual other ducks at Forest Grove.

Saturday 1/9: Quick trip to Meriam’s and Kaveski had a harrier. Afternoon visit to the riverwalk (down to Prospect St) had a few ducks but no Pine Warblers.

Sunday 1/10: Finally got out to Bolton for Pine Grosbeaks. Poked around Nine Acre a bit after, distant Red Crossbills but no obvious White-wings, a Pileated, and a few other things.

Wednesday 12/30: Redpolls about it at Forest Grove. No big mallard flock to pick a pintail out of.

Thursday 12/31: Just did a very brief res/Flint’s/Nine Acre check, wigeon and Ring-necks at the res, 300+ geese at Nine Acre, and that was about it.

Friday 1/1: No BBC trip this year, so just did the res (not much) and Dunback (distant crossbills, a siskin, another interesting flyover call).

Saturday 1/2: Only able to do a very quick check of Hardy, nothing there.

Monday 1/4: Quick run partway around Arlington Res had a raven but no interesting ducks.

Wednesday 12/23: Couple redpolls but nothing else at BBN.

Saturday 12/26: Started at Draw Seven, where two of the three scoters were barely visible in the sun (turns out the Black was around the corner). Also a nice kestrel. Crossed the river to get all that from the Earhart side and added a loon and an Iceland Gull. Decided on the Mystic Lakes instead of Ell Pond and vicinity after which was a mistake, but did see the cormorants at least.

Sunday 12/27: Supposed to be a finch day. Started at Watatic (after a quick, birdless scan of Fitchburg Res). Surprise of the day was a Herring Gull as I was starting the hike up. Grouse flushed in the usual spot, nothing at the top, but did at least hear a WW Crossbill as I started down. Pretty birdless on the way back to the car. Continued to Townsend State Forest where I did the longer loop and had 3 chickadees and a RB Nuthatch, then a few more plus titmice and WB Nuthatch at a feeder walking back along the road. Townsend Hill WMA had a mobile flock of redpolls and Michael Veit, who I hadn’t seen in years. He gave me a couple spots for Pine Grosbeak in Pepperell. Headed over to those but only found Cedar Waxwings. Decided it was too late for the Bolton ones and headed home.

Monday 12/28: No crossbills or anything else at Habitat.

Wednesday 12/16: Yellow-rump and a flyover redpoll were it at Dunback.

Friday 12/18: Made a lunchtime run down the Charles, one Bufflehead about it. A few mergansers on Hardy.

Saturday 12/19: Semi-attempted CBC scouting. Checked whether the road at Prospect Hill was cleared, then gave the res a quick buzz. Or would have been quick had a Tundra Swan not stuck its head out. Waltham #222, res #182! Didn’t really check much beyond that.

Sunday 12/20: CBC, but with covid protocols it was easier to do solo sections. Falzone had 2 Hermit Thrushes, a Purple Finch, and a Winter Wren. Hardy was frozen, Paine reminded me why we don’t go anymore (although I did hear the geese that the eagle apparently flushed from the field station), and a few Mallards by the Y. Graverson had another Winter Wren and a few sparrows. Afternoon attempt to find some active feeders failed pretty miserably.

Monday 12/21: Gave the res a quick scan, swan on the commute list (236 overall, 189 for this year). Had enough time after for the duck ponds, one of which was somehow mostly open. Just geese and Malllards and not much in the trees.

Saturday 12/12: Jamaica Pond once the fog burned off, took a minute or two but the Eared Grebe showed really well. Nothing too exciting with it. Continued out to Wellesley for the chat, no luck with that but a few ducks at least.

Sunday 12/13: Foggy again. Couldn’t see much at the res. Nine Acre had 500+ geese but nothing else. South end of Nagog was clear, north end not so much, nothing particularly interesting. Decided to try Rocky Hill in Groton, Winter Wren the only thing of note. Nagog was foggier somehow on the way back.

Monday 12/14: Two grackles, 5 Red-wings, and a probable northern Red-tail at West Meadow, nothing much at Falzone.

Tuesday 12/15: Nothing by Moody St. Two eagles at Mt. Feake, nothing different at Hardy.

Thursday 12/3: Pacific-slope put on a good show this morning (‘commute’ #235). Had enough time for Blair Pond too, but they were working on the train tracks so nothing beyond a kinglet and bunch of Hoodies there.

Friday 12/4: Heard a couple crossbills at Kaveski, no redpolls or White-crown but did have a sharpie and harrier.

Saturday 12/5: Rather nasty, quick run around the res had an eagle going after the coots but nothing else close enough.

Sunday 12/6: Dunback had a vulture, 6 redpolls, and a Winter Wren. Nothing but Canada Geese at Nine Acre and the usual ducks at the res, although more scaup than there had been.

Monday 12/7: Tried to the very late Spotted Sandpiper at Menotomy Rocks without success. PB Grebe and cormorants were the best at Spy Pond after.

Tuesday 12/8: 20 Redpolls at Cookson, not much else there or Watertown Square.

Wednesday 11/25: Started early at Fresh Pond but no sign of the Western Flycatcher. Second run later in the day missed the bird by about 5 minutes.

Thursday 11/26: Nastier than I hoped, did a res-Flint’s-NAC run without much of note.

Friday 11/27: Started at BBN where I finally got a Marsh Wren for Waltham (and a second later). Also a late catbird, a crow/raven/Red-shoulder group mobbing a Great Horned Owl and jays mobbing a Barred Owl, and a couple Yellow-rumps. Back to Fresh Pond. Bird was slightly cooperative, although not vocalizing. Not a ton else in a full loop.

Saturday 11/28: Decided a trip up Rt. 3 was a good idea. Lake Mascuppic zero birds, so on to a quick check of River Front Park. That was pretty dead but at least I got some common stuff I needed for Tyngsborough. Two Pileated over High St on my way to Amos Kendall. One distant crossbill and a siskin but not much else. Arched Bridge was even quieter (even though it was getting sunny), but I had a couple more crossbills close enough to record just before leaving. Quick check of Waltham St on the way home had nothing.

Sunday 11/29: Started at Alewife/Thorndike (after a Merlin eating breakfast on Lexington St). Not much there. Continued to Torbert McDonald, which wasn’t bad. Flyover redpoll and a Yellow-rump to start, then a few more redpolls at the far end. Started to cut back across and noticed something among the geese, which turned out to be a meadowlark! Couldn’t make it a Western, but not a bad bird for here. Another 20 redpolls went over while watching it.

Next stop was Draw Seven, email check before I got out had me scanning for Jonathan’s Brant. No luck with that but the Surf Scoter was present and another redpoll flew over. I moved on to the Wellington Greenway to check further up the river and noticed that it had moved to Sylvester Baxter, so I got the scope out. And couldn’t find it. Lots of geese visible in the water back at Torbert, so I went back there instead of getting the scoter for Everett too. No Brant visible but the meadowlark was still hanging around. 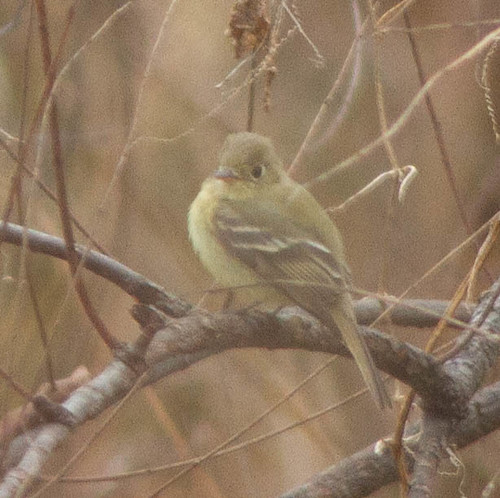 Wednesday 11/18: Nothing in the cold and wind at Fresh Pond.

Thursday 11/19: RC Kinglet and a couple flyover siskins about it at Forest Grove.

Friday 11/20: Red-breasted Nuthatches and ravens were about it at Great Meadows headquarters.

Saturday 11/21: Not much at Cold Spring to start (missed the crossbill flock of multiple types). No bluebirds or finches at Millennium and Brook Farm, did get ravens for #100 at Millennium. Was going to stop at Kendrick Pond but too many people so just did Hobbs Brook and saw nothing.

Sunday 11/22: Decided to give coastal Boston a swing, mostly hoping for Cave Swallow. No luck with that and it wasn’t very nice out. Deer Island had almost no passerines but did have the large scoter/eider flock. Out at the tip, I was panning through another eider flock and picked up a guillemot! It dove and gave me a slightly panicked few seconds before it came back up and I could manage a few photos. It then took off, which at least gave me slightly better photos. Surprisingly, my first in MA away from Essex county.

Next stop was the Winthrop Greenway and Belle Isle Cemetery. Nothing too exciting, a couple of late yellowlegs and a Common Merganser the most interesting. On to Earhart. Walked out the little grassy point and the Glaucous Gull was back. Gave the casino grounds a brief look then zipped over to Draw Seven to get the gull in Somerville. Almost couldn’t find it at first, it was climbing up onto the rocks at the fishing platform, allowing for full frame photos. Also a Merlin and a raven here. Last stop was Spy Pond where Jonathan had found and Iceland Gull earlier. No sign at Linwood, but I decided to give the park a quick check and had the gull in the scope pretty quickly. Not the day I expected, but one I’ll definitely take.

Tuesday 11/24: Redpolls and a Rusty at Dunback.