Wednesday 7/10: Morning flight via Chicago. Arrived in Austin midafternoon, got the car quickly and headed somewhat north before pulling off and finding a supermarket. Got a few supplies then picked an area with hotels in Cedar Creek. First of many Scissor-tailed Flycatchers on the wires along the way. Dinner at Popeye’s.

Thursday 7/11: Had most of the day free before getting to the meeting hotel late afternoon. Plan was to try for the two central Texas endemic breeding birds: Black-capped Vireo and Golden-cheeked Warbler. It’s a bit late in the year but not impossibly so. The obvious spot for the vireo is the Shin Oak Observation Deck, so I pulled in there right at 7:30. It was a bit cloudy (and actually sprinkling a bit). I immediately realized I barely recognized any song. The bunting in the parking lot proved to be a Painted. Several vireos were singing, some were obvious White-eyed but others I wasn’t sure about (in hindsight, one was a Black-capped). I sat around for an hour without any sign before deciding to move on. Back at the car, some movement in the taller trees got my attention and turned out to be a warbler! Talking to locals later, this was a pretty good bird for the spot this late in the year. 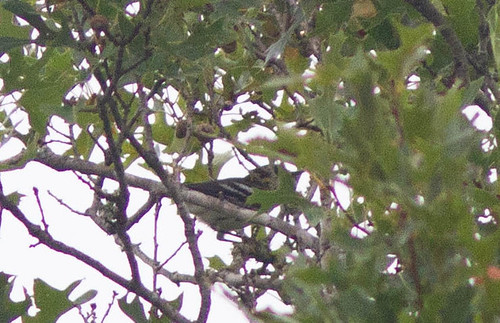 From here, I drove to the other end of Balcones Canyonlands NWR to the Warbler Vista. The trail itself was very quiet, basically nothing but White-winged Doves. Just before reaching the road to loop back I had my first new dragonfly, a Checkered Setwing. Along the road was a bit birdier but nothing too exciting. I started to drive out but heard a good deal of song right near the parking for the trail I came out on, so I pulled in and walked back a bit. A couple more warblers gave brief appearances and there was a Hutton’s Vireo, which was a known rarity at the spot. Unfortunately too far in to get photos. 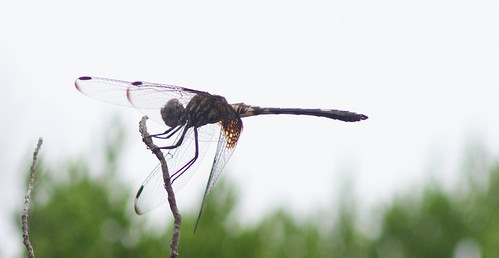 I started back towards the observation deck and stopped at Doeskin Ranch for a bit of a walk. It was really hot by now, but I walked the creek trail and down to the pond. Lots of dancers including my first Kiowa, Springwater, and Aztec along with rubyspots, Great Spreadwings, a Four-striped Leaftail, an Eastern Ringtail, a Comanche Skimmer or two, and some butterflies were all nice. 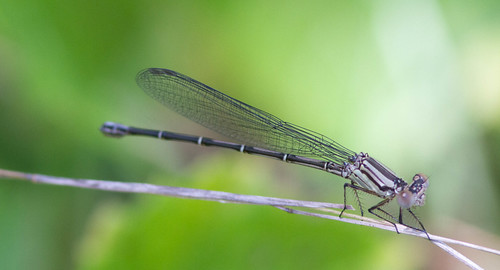 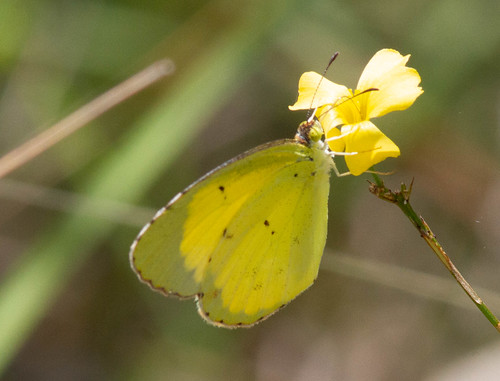 A quick stop back at the platform was quiet, so I started towards lunch and the hotel. Lunch ended up being an ice cream sandwich. I got to the hotel area around 3, so drove around a bit before checking in. After a few hellos and a shower, I ended up going out to dinner to Guadalajara’s with the Donnellys, Jerrell, Hal, and Jim. Good food and company. I hung around the lobby a bit more talking to a few others before finally crashing.

Friday 7/12: Today was the first day of field trips. I joined the Hummels in the group that was heading to Southeast Metro Park and Hornsby Bend. The metro park was fun, if not my idea of great habitat. We had Jade Clubtail, Broad-striped Forceptail, Red-tailed Pennant, many saddlebags, and more around the pond. Along the wooded trail at the back we added Flag-tailed Spinyleg, Thornbush Dasher, Four-striped Leaftail, and the largest robber fly in the US, Microstylum morosum. A cruiser just before we left provided some interest but turned out to be a Swift River, which is the species in MA (although a different race). 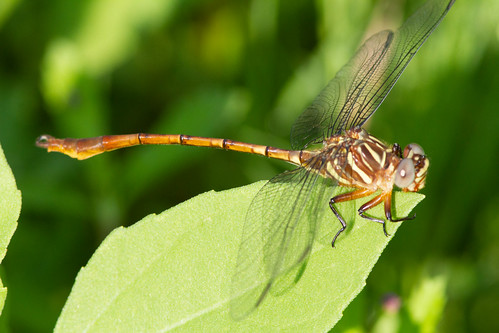 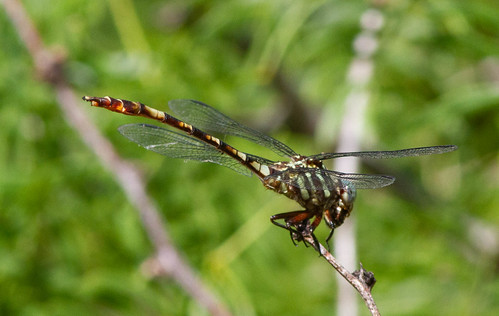 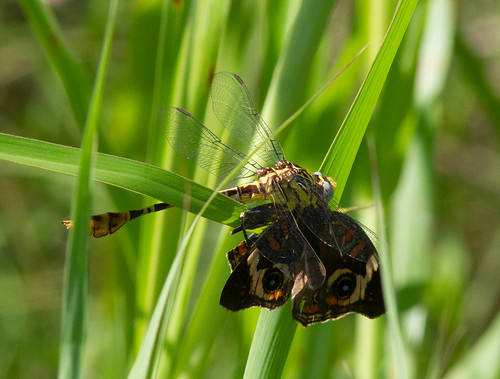 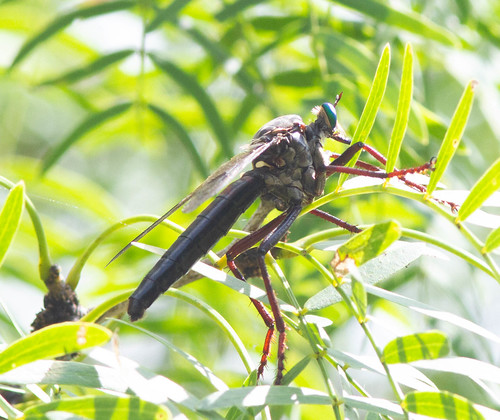 The heat was pretty bad by now, but we gave Hornsby Bend a go. At the entrance building, we had an armadillo and some wheel bugs, then hit the trail. Cobra and Russet-tipped Clubtails and a Carmine Skimmer were the highlights before a few of us had enough and started walking back. We ended up hanging at the observation blind for a few and then strolled slowly enough that the rest of the group caught up by the time we got back to the cars. 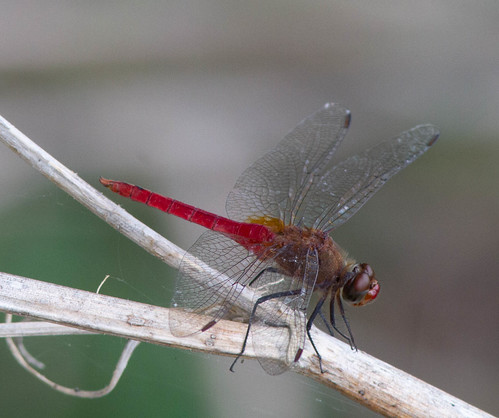 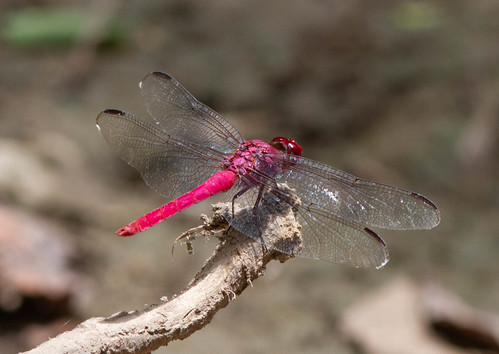 We left at this point, although some of the group apparently kept going. Back at the hotel I hopped out (a little quickly for some foreshadowing), zoned out for a few hours, then joined the Donnellys and Jerrell for dinner at Chili’s.

Saturday 7/13: Today was the indoor meeting, at the very nice McKinney Roughs center. Talks were generally good (the discussion at the end didn’t quite stay on the intended subject and went nowhere). Lunch was good, dinner was ok. The Black Witch on the wall of the center was pretty nice too.

Sunday 7/14: Second day of trips. Josh joined me with the group heading to Gonzalez for the iconic species of the meeting, Blue-faced Ringtail. After the hour’s drive, we reached the park (apparently the only public location for them in the US right now). I started to get my stuff together and discovered my net handle was now a screw-in instead of a clip. Oops. I sent a message out hoping for someone to contact Steve, then went off with a shorter net. Others had found Ringtails already and we all got good views of at least one male and female. Also in here were Eastern Ringtail, Cobra Clubtail, Russet-tipped Clubtail, and Five-striped Leaftail. I had a Diogmites robber fly pass by dragging a Powdered Dancer. 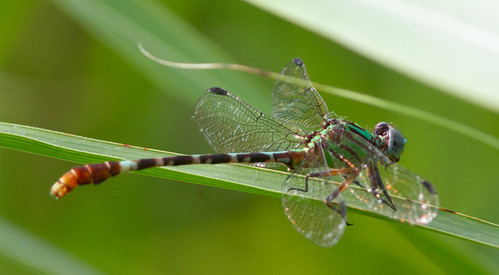 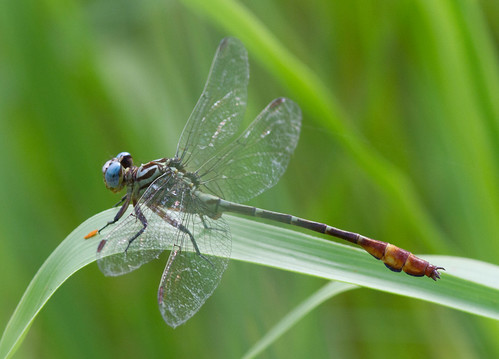 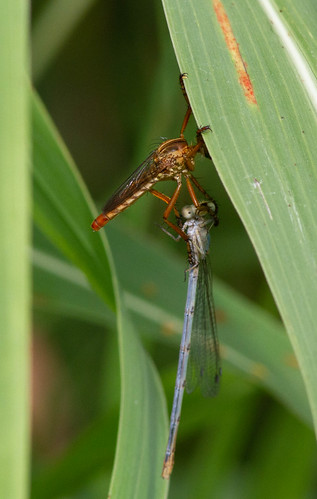 Having checked all around here, Josh and I headed north to Stokes Park in San Marcos. Along the way Steve called and we arranged to swap handles as soon as I got back to the hotel. That cut another stop out, but it was only for spreadwings so not a huge loss. At the park, we had plenty of Neotropical Bluets and eventually found a few Coral-fronted Threadtails (a new family for me) and some Desert Firetails. After spending some time trying for photos, we made a quick check of the Comanche Dancer and Gray-waisted Skimmer spots with success, then headed back. 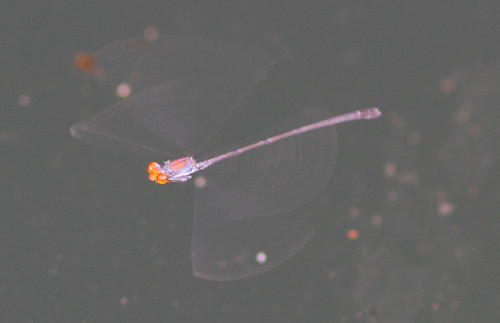 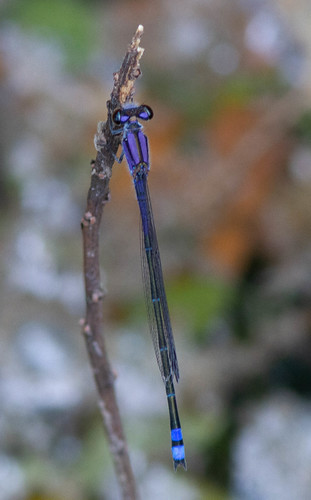 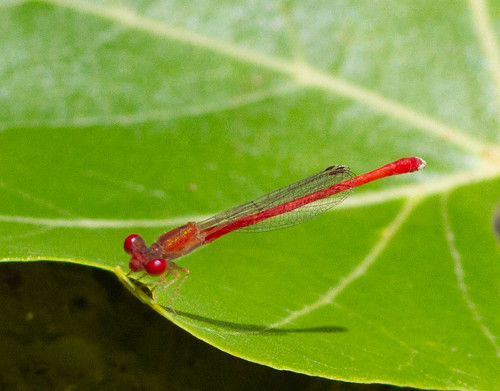 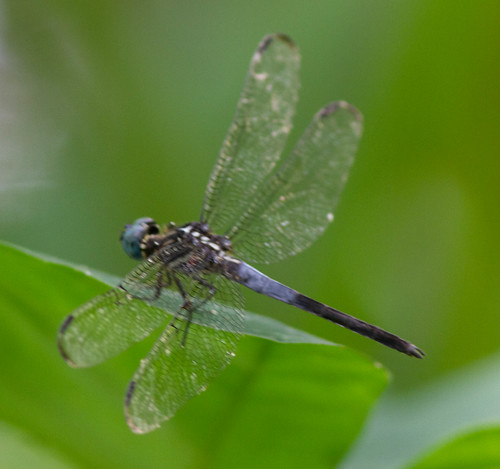 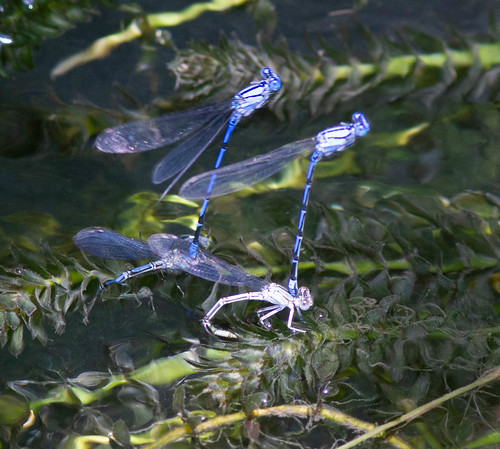 After trading equipment and saying goodbye, I ran to Whattaburger for lunch. Even though it was hot, I decided to head out and check another spot or two. After a quick return to the hotel (someone forgot something important in the car…), I went to Barkley Meadows. It was really, really hot but I found some cool robber flies, got good views of the Cliff Swallow colony, and a few other things. I eventually headed back then joined Josh and the Virginia crew for dinner at Neighbor’s. 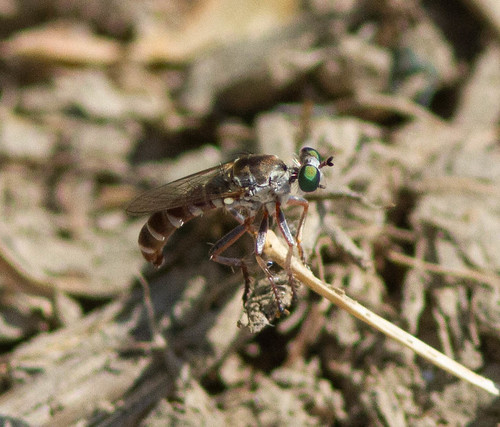 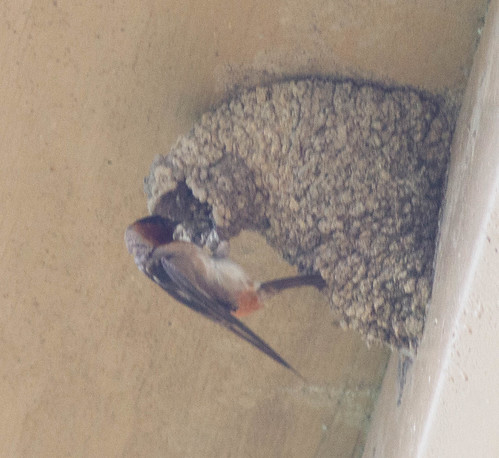 Monday 7/15: I had given myself a day on either end to chase things, so had a second shot at the vireo. First though, I headed to Commons Ford Ranch, hoping to catch up with a few other birds. Didn’t get my target of Dickcissel and Rufous-crowned Sparrow but did have Yellow-billed Cuckoo, Yellow-throated Warbler, and Lark Sparrow, plus Pale-faced Clubskimmer. I then went back to the observation deck, where after about 45 minutes a Black-capped Vireo flew through, stopping just long enough for a couple shots. 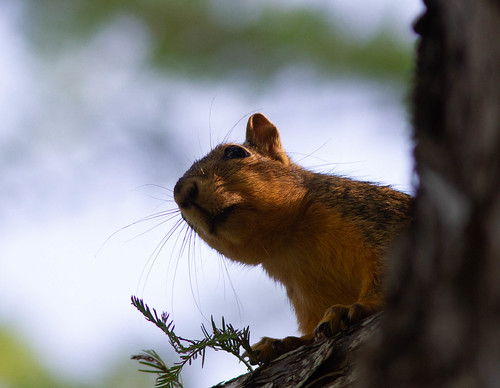 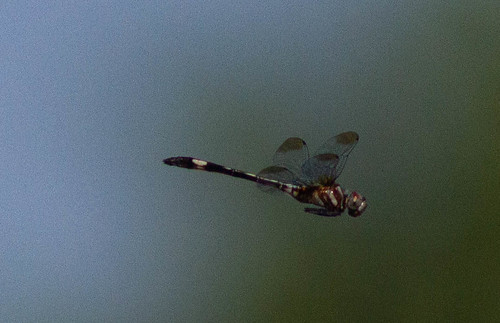 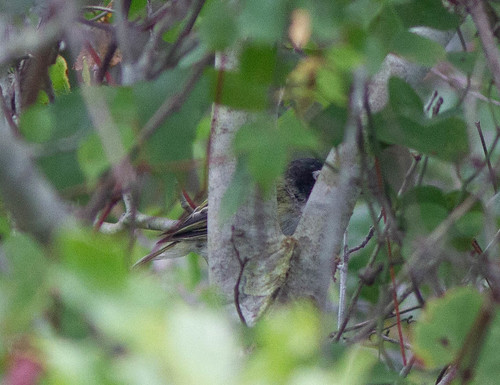 With that success, I headed in the general direction of the airport, eventually deciding to check out Webberville Park. Too hot, but along the river I had a perched clubskimmer, some kind of underwing moth, and lots of Dusky-blue Groundstreaks. I gave the other section of the park a quick check but only had Russet-tipped Clubtails. 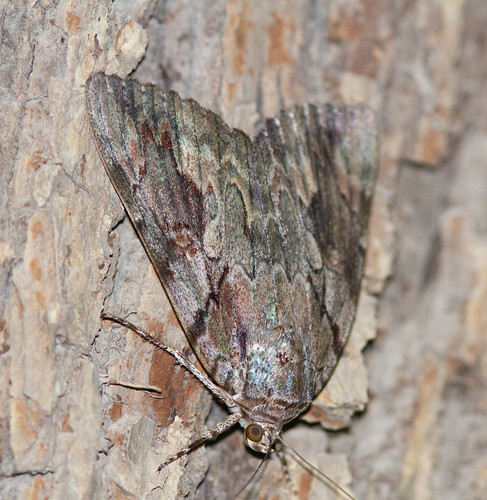 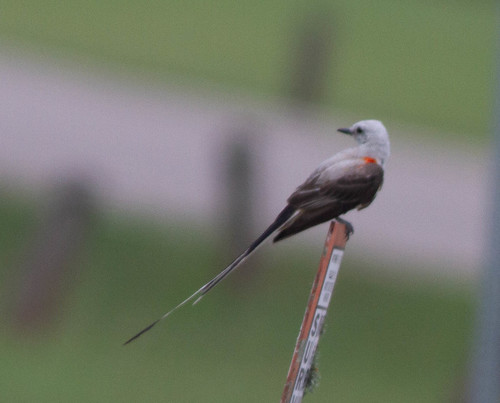 After a bit of driving around, I settled on a Super 8. After a shower, I decided to zip into downtown Austin for the bat show. Took some time to find parking, then I grabbed a burger at the Burger Bar. The bats were disappointed, whether season, moon phase, or what, there were only a few hundred flying around when I gave up at 9:15, when it was almost too dark and I still had to pack. The ride back was a bit of an adventure with construction making for an extended loop but I got back and got everything together fairly quickly.

Tuesday 7/16: Returned the car, got on the plane, and was back in Boston early afternoon.