So I suppose I should do a review like everyone else.

Top 10 things in Waltham this year:

10. Prince Baskettail
Not at all unusual, but finally getting a photo of one was nice.
9. Cape May Warbler
One of the less common warblers that I missed in the spring, getting it in fall and adding it to my Waltham list was a good surprise.
8. Iceland Gull
A second sighting for me in Waltham, but much more cooperative than the previous one (and it led directly to one of the other highlights).
7. Yellow-bellied Sapsucker
An overdue new bird for Waltham.
6. Red-necked Grebe
Another overdue bird and also only my second for the county.
5. Bald Eagle
Yet another overdue bird, but two of them putting on a good show would have made this list even if I had many previously.
4. Hooded Warbler
A nice spring overshoot, my first self-found one in Massachusetts.
3. White-winged Crossbill
Great birds and after chasing them around for several weeks, it was great to see them up close.
2. Lesser Black-backed Gull
A very good county rarity and one that points to the potential of the Charles.
1. Worm-eating Warbler
One of two birds that I couldn’t talk about at the time (the other is #0 on this list). I heard about one bird on territory and when I went to check it out, found a second nearby. Hopefully breeding will be confirmed next year. Given the amount of bushwhacking I did to find them, who knows how long they’ve actually been around? And how many other good birds are right under our noses? 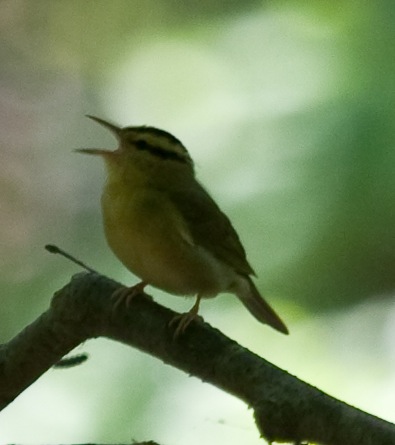 And 10 more from elsewhere in Middlesex county:

10. Sleepy Duskywing
Probably the most common butterfly I had yet to identify before this year, I finally found a couple that felt satisfactory.
9. Summer Tanager
A bird that I’ve missed a couple times in the county. Running over to Mt. Auburn at lunch meant views were brief (especially since I was more interested in a presumed Bicknell’s Thrush nearby).
8. Harlequin Darner
Great dragonflies, even though one tried to take a bite out of my finger.
7. Lilypad Forktail
The ghost white mature females are extremely cool. After hearing about them at the DSA meeting, I was very happy to find them along the Charles. Hopefully I’ll be prepared with a camera next year.
6. River Otter
A very brief view but a great sighting in Wayland.
5. Great Meadows Shorebirds
Great Meadows had enough mudflats to bring in the shorebirds again this year and they showed up. I found 16 species including county rarities such as Baird’s, White-rumped, and Stilt Sandpipers, and American Golden- and Black-bellied Plovers. Not quite shorebirds but the bittern show was spectacular as well. Photos of some of those birds here.
4. Yellow-headed Blackbird
At one point, I had almost 20 county years birds in a row at Great Meadows (Common Nighthawk and Great Egret weren’t but they were both either coming or going so they almost count). The best was the Yellow-headed Blackbird that spent a few days right along the path, closing a big hole on my state list.
3. Lark Sparrow
After chasing and missing many over the years I finally got one in Massachusetts. Nice and cooperative (and at a spot that hosted several last year).
2. MacGillivray’s Warbler
A nice late fall rarity.
1. Tufted Duck
A nice early spring rarity. One of several excellent birds on these lists found by John Hines, I was able to get out to Water Row quickly and got good views and fair pictures (and I hear that those may be the first pictures of a Tufted Duck in Massachusetts).

5. Comet Darner
One of the coastal plain specialties, huge and red, how can you go wrong. Highlighted a trip to Miles Standish State Forest. Unfortunately too fast to photograph, but some of the other things weren’t.
4. Black-capped Petrel
The pelagic highlight of the year. Would have been higher on the list, had the boat been steadier and I had gotten more than a couple seconds of views.
3. Ross’s Goose
One of the best days of the year started with a flock of these.
2. Short-eared Owl
And ended with these (and a Snowy).
1. Ivory Gull
I’m not convinced I wouldn’t put the adult as a top 5 bird in the world. Fortunately after just missing the Gloucester one, the Plymouth one hung around another week.

And a handful from out of state: