Wednesday 11/12: Wandered around Lindentree in the fog. Siskins and a beaver. Opossum running around the yard when I got home.

Thursday 11/13: Great Meadows was pretty dead. Got the jets flying over and added pipit and Marsh Wren to the commute list.

Friday 11/14: Nothing obvious at any of the ponds, although sun and traffic made for tough viewing.

Saturday 11/15: Started at Nahanton, which was quiet beyond a Hermit Thrush and Purple Finch. One shoveler at Purgatory Cove and lots of Hoodies but not much else. Nothing obvious at the res or Hardy. Something for later in the afternoon.

Sunday 11/16: Wanted to check School St for longspurs and geese, so worked my way out stopping at Kaveski first. Driving down Shadyside, an adult male Northern Harrier crossed the road twice (unfortunately it was then chased off by crows before I could park and jump out with the camera). Sparrows galore along the road and hedgerow including at least one White-crowned. Walking way out towards Elm Brook, I heard an check-type note that I wanted to call a Marsh Wren but didn’t seem quite right. Bushwhacked in a bit and a female Common Yellowthroat popped up for a second.

School St was fairly dead (no geese and the lark/pipit flock was barely visible at 60x in the scope), so I checked Warner’s Pond (nothing) and the prison fields (moderate number of geese, nothing obvious among them but not easy to see and I didn’t linger). Debated Nine Acre Corner or Waltham St from there and picked Waltham St (checking on the heron and 3 crows at Hobbs Brook on the way). Totally dead there, just about circled all four fields with nothing more than cardinals and Song Sparrows. And then in the last couple feet, something a bit different popped up. Fortunately it landed in the open and stayed long enough for a couple shots: Grasshopper Sparrow! 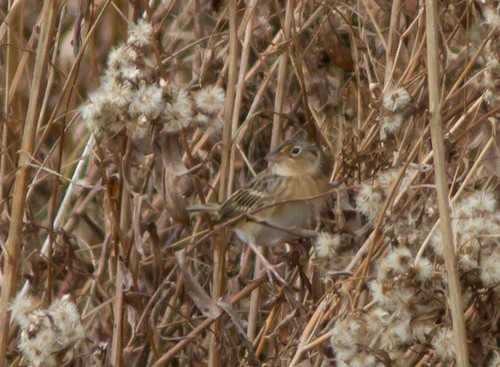 Cambridge Res was about the same, except the Ring-neck and most of the Ruddy flock was out by 128 and couldn’t be scanned carefully. Also 3 turkeys would have caused a good traffic jam had it been a weekday.

Tuesday 11/8: Cat Rock Park was quiet. Winter Wren plus a flicker in the middle of a low bush and lots of gulls overhead.