Wednesday 5/25: West Meadow for a change. Calling BB Cuckoo was it for birds, but a Dytiscid beetle larva (common name Predacious Diving Beetles) was cool.

Thursday 5/26: Breeding bird survey at Habitat had a bunch of migrant warblers.

Friday 5/27: Rock Meadow survey had the expected. Quick loop around Lot 1 didn’t have much.

Saturday 5/28: First central MA swing of the year. Started at Willard Brook, which had a few BT Blues and not a whole lot else. Ashby side of Watatic next, which had a Silver-bordered Fritillary, Silvery Blues, Beaverpond Clubtails, and American Emeralds, which surprisingly appear to be a county ode (99!). More of the same at Townsend State Forest. Doing the loop around to the back of the rear pond, there was some interesting rustling ahead of the trail. Exciting to see the bear walk out, but I wasn’t about to continue so never checked the pond.

Sunday 5/29: Led a BBC/MBC/probably 3 more groups walk at Great Meadows. Too many people to start, but we worked our way to the river with a few decent things. Slightly odd song along the river, so I walked down a bit while everyone else looked at a Great Crested. It finally flew across and confirmed what I was thinking. 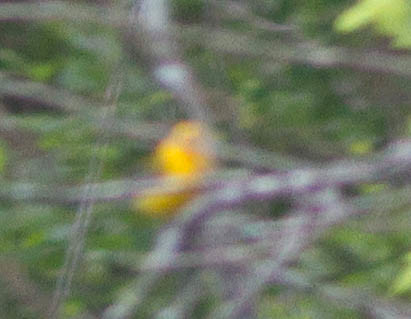 A couple quick snaps, then a shout Prothonotary! Unfortunately most people heard Solitary and scanned the bank and not the branches above. The bird came back to our side of the river and disappeared. We wandered down and just about everyone was able to hear it, but it was much too deep to see. The rest of the walk was fairly quiet.

Monday 5/30: Wandered back to Great Meadows as the rain ended, hoping for Least Bittern or Black Tern, but it was quiet. Didn’t try for the warbler, but heard negative reports. Checked Heard Pond and Pelham Island Rd quickly, with an Osprey at the pond and a snapping turtle laying eggs on the side of the road. Vulture and hummingbird over the yard in the evening.

Tuesday 5/31: Another Habitat survey, BB Cuckoo was interesting and there was a flycatcher that I would have liked to have heard more.