Wednesday 2/21: Looked for the goose again, nothing at all on the golf course. A few Canadas at the duck ponds but not much else. Looped Rock Meadow, normal early spring stuff. Came home back roads with the windows rolled down and had a peenting woodcock in Lincoln.

Thursday 2/22: Surprisingly quiet at Purgatory and Forest Grove. Merlin perched over the road, a few blackbirds, a Wood Duck, and that was about it.

Friday 2/23: Best of the ducks at Great Meadows were a few wigeon, a goldeneye, and 25ish Ring-necks, not much in other birds.

Saturday 2/24: Finally got a Cape Ann trip in. Mostly quiet at Andrew’s Point. Was told about a Thick-billed Murre at the Granite Pier, so headed that way. Murre was in close when I arrived, but I got distracted by a Northern Common Eider next to it. Jodrey had nothing (but it was nice to get some close eider to compare). Eastern Point had another murre, several guillemots, an Iceland Gull, and more of the same ducks. Didn’t really stop at Niles other than to pick up scaup. Nothing at the Elks Club, Glaucous on another pass of Jodrey, then Barrow’s Goldeneye but no King Eider at Plum Cove. 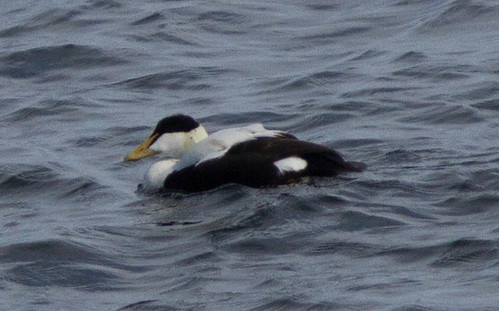 Sunday 2/25: Worked my way west to start. Bufflehead and Common Mergansers at Flint’s, cowbirds and not much else exciting at Nine Acre. The White-fronted Geese were at School St (although one immediately disappeared) along with a few pintail. Arlington Res had a ton of gulls, none interesting after a few minutes of excitement. Two Great Cormorants, 425+ Common Mergansers, a couple Red-breated, and one of the Red-throated Loons at the Mystic Lakes. About 25 Ring-necks on the res (finally).

Monday 2/26: Thought Heard Farm was quiet, but a Fox Sparrow started singing as I was leaving. Bunch of Ring-necks on the pond too.

Tuesday 2/27: More in Wayland. Not much at the old Rt. 27 bridge. Had 15 minutes or so to check Pelham Island Rd and got 25 species including the Rusty I was looking for.