Wednesday 2/13: Still too snowy for much. Tried a drive through of Norumbega but the lot wasn’t plowed and it looked like gulls and nothing else.

Thursday 2/14: Nothing of note at Dunback.

Friday 2/15: RB Merg along Moody St but not much else there or at Purgatory. Did have a banded Ring-billed Gull, which was from Montreal, slightly more movement than the last one I reported. 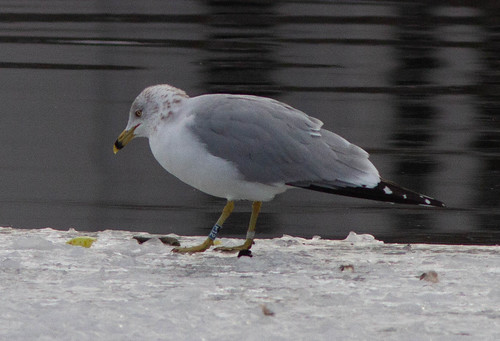 Saturday 2/16: Red-wings singing from the yard first thing. Attempted a central MA loop. No Snow Buntings at Wachusett in a short walk, 3 loons about it. Headed north from there and ran into either unplowed or iced over lots just about everywhere. Did take a long walk at Townsend State Forest, which had chickadees, titmice, nuthatches, jays, ravens, juncos, and a dove. Gave up after that and headed to School St (crows) and Dunback (nothing).

Sunday 2/17: Horn Pond had a redpoll, a bunch of Red-wings, and 2 wigeon. Nothing at Mary Cummings. Both loons at Draw Seven, not much at Earhart.