Today I finally caught up with the Townsend’s Warbler that has been hanging around in Cambridgeport for the last few weeks (at least).

After spending almost 5 hours last Sunday (with one person getting a likely sighting) and another 3 hours yesterday (seen 10 minutes before and several times after), today’s effort was almost too easy. We left the house at about 6:50 and were parking by 7:10, which was pretty good for lots of red lights and a detour at Mt. Auburn. We walked over, said hi to Phil Brown and a minute later the bird popped up and proceeded to sit in the open for probably 45 minutes. 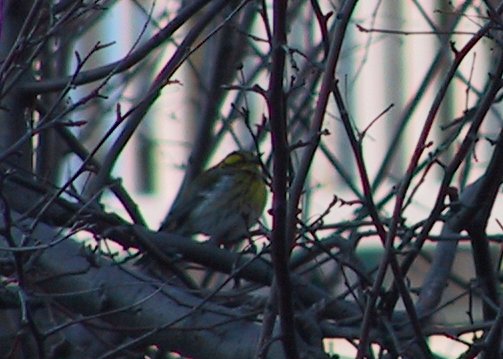 I took several photos, but that’s the only one that’s good enough to show publicly.

So that’s 450 in the US now. Should have gotten to that in New Mexico, but within 3 months isn’t too bad.