Wednesday 7/23: Monarchs at Rock Meadow, Least and Solitary Sandpipers at the ponds. Something in the afternoon. Also finally found the area of Townsend State Forest I’ve been to with a group for odes before but haven’t found again myself.

Thursday 7/24: Cat Rock Park and College Pond were both fairly dull (although if I had a view of the sky when the yellowlegs-ish call drifted down…).

Friday 7/25: Wandered a bit in Lincoln midafternoon. Kingfisher and a couple Solitaries were about it.

Saturday 7/26: BBN had 5+ Blue-wings. Nothing different at West Meadow or the ponds.

Sunday 7/27: Started at Great Meadows. No shorebirds on view and I was pretty discouraged on my way back from the river (needed to mow the lawn before it started raining and could have been using the time better). Then two odd shapes appeared in the path. 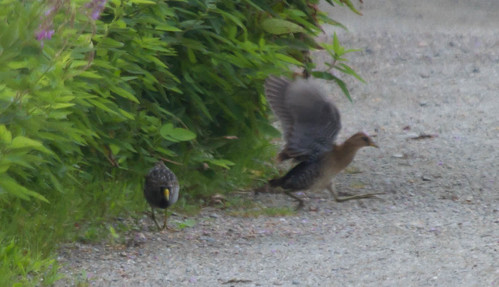 Wasn’t the best light, but when a walker came by, I zipped to the other side. The adult came back out and posed nicely. 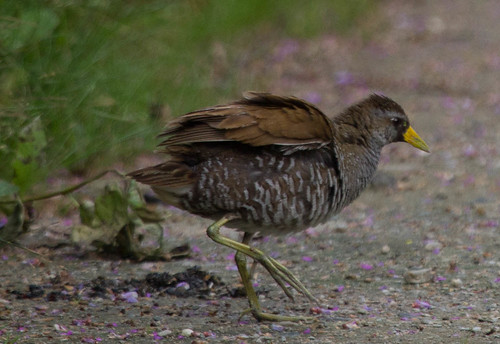 Continuing on, I found the American Bittern right at the edge by the benches. Unfortunately, it saw me even before I had the scope down and took off up and over well before I could lift the camera.

On to Knox Trail, which had lower numbers but most of the same shorebirds.

Monday 7/28: Late morning check of the duck ponds, nothing of interest and to flooded for sandpipers. Sitting outside in the afternoon, a Peregrine passed over twice, which is the last expected raptor for the yard list.

Tuesday 7/29: Heard Pond and the Pelham Island Rd swamp had nothing terribly exciting.