Thursday 4/5: Heard a Pine Warbler (only one) at Prospect Hill plus a Fox Sparrow.

Saturday 4/7: Few Tree Swallows, a cormorant, and a phoebe at the res but little on the water. Nothing at Flint’s or Nine Acre. Alewife had a cleanup crew and was quiet. Thorndike Field was quiet too, as was McClennen.

Sunday 4/8: Started in Squantum. Usual birds at Squaw Rock. Got the gannet I wanted and first egrets (both Snowy and Great) at the marshes. Decided to skip Squantum Point and Wollaston and went to Nut Island. Far too windy but there were a few Long-tailed Ducks visible. Went inland from here (picking up Gadwall on Black’s Creek as a driveby), trying Turner’s Pond which didn’t have any of the ducks that had been there the day before. Headed towards home, deciding to stop at Cutler Lake on the way. No luck with the Pine Warbler I expected but did get a creeper. When I started, there was exactly one gull on the water, by the time I was halfway around, it was closer to 100. A bit further down, the bright white of a Glaucous jumped out, and reviewing photos of that, I picked out the Lesser Black-backed that had been around too. Buzz of the res on the way home had 2 Greater Scaup and just short of nothing else.

Monday 4/9: Too windy at Great Meadows. Did hear a Virginia Rail before I bailed for the woods, where I had a Pine Warbler (and a Yellow-rump by the inner parking lot).

Tuesday 4/10: Another Yellow-rump at the Pelham Island Rd swamp. Real surprise was a Cliff Swallow on Heard Pond. 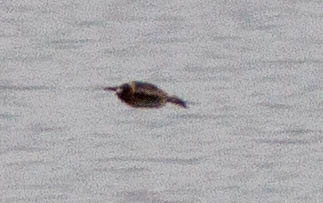