Given the expected heat on Sunday, I wasn’t sure what, if anything, I wanted to do. However, upon hearing about plans for pancakes, I realized I could get up and go to Great Meadows early, take a quick walk down to the bitterns, and get home for breakfast. That almost happened.

Turkeys were all over the roads on the way over. After parking, I started down the trail and paused to photograph a rabbit that didn’t want to move.

Once passed that, I reached the bridge. There’s a muskrat hut on the right and I noticed some ducks on it. Scanning, there turned out to be both a Mallard and a Wood Duck family on there. I moved on and some of the ducks dropped into the water and started swimming off.

Two steps later, I heard an odd call. It sounded like something I had heard a couple weeks ago but as that hadn’t been reported since I assumed I was hearing one of the ducklings. I stopped to look and heard it again from a different spot. I looked up and there was the Whistling-Duck. I quickly snapped a couple photos as it circled over, went to the far corner. It came back and disappeared back in the corner it came from. 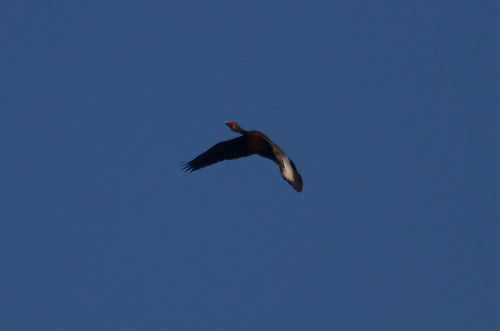 I quickly sent a brief message out (figuring 6:50 on a Sunday was a little early to start calling people) and after a quick scan failed to find it, continued on. I checked by the benches where it was originally seen and found a few geese. Moving on, I wandered towards the river, hoping to find some sandpipers on the little bit of mud that wasn’t under the lotus.

Just past the new platform, I heard the duck again. Turning around, I watched it come crashing down, apparently near the benches. I rushed back and found it just off the edge of the path. Couple more pictures, make sure it seems settled, and post again. I then settled in to wait for the expected crowds (believe this is the first one in Mass to not be found late in the day or to vanish at dawn). I even sat down and made a sketch (which I don’t need to reproduce here). 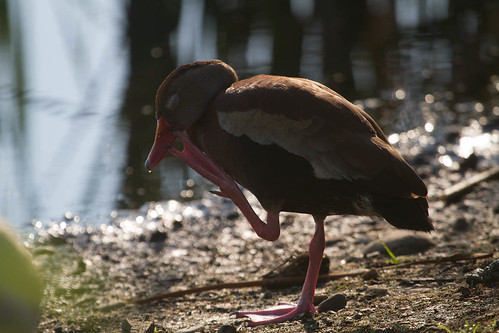 The first to arrive was extra lucky, having just happened to be there and had no knowledge of the bird. After that, there was a slow trickle for quite a while and then it became a steady flow of people. The duck cooperated for most of the time, but eventually swam out of sight. I was hungry at that point and headed out. The duck apparently came back into the open fairly soon after and stayed for pretty much the whole day.