Well that was unexpected. I spent most of the morning in Sudbury, picking up a few new migrants and a couple other things. On the way home, I debated a stop in Lincoln but decided to check the Hobbs Brook end of the Cambridge Res instead. Got there at about 11:35 and a couple Killdeer and a Spotted Sandpiper visible from the road were enough to say park and walk out.

Leaving the underpass, I pulled out my phone for a quick email check. 11:30 message subject Whimbrel in Lincoln?. Continue walking out while calling Marj. Did you check your email? What’s Norm’s number? Why did I leave my bag with notepad and pencil in the car? What’s that number again? Sorry, traffic noise is too much, what was that? Hi Norm, where’s the bird? On the way.

I did stop to scope the little bit of mud quickly (I think there were more Killdeer and a few waterfowl) before jogging back to the car and backtracking to the commuter rail station. Quick run down to Farm Meadow and no bird.

Norm appeared and started down the other side, so I went back to join him. Marj got there at about the same time and we started out along the edge of the field. No obvious Whimbrel. Halfway out, with most of the field visible, we were beginning to think that it had moved on. We continued around, but mostly talking.

Barely paying attention, we just about reached the farthest corner. And something flushed. And everyone was happy. 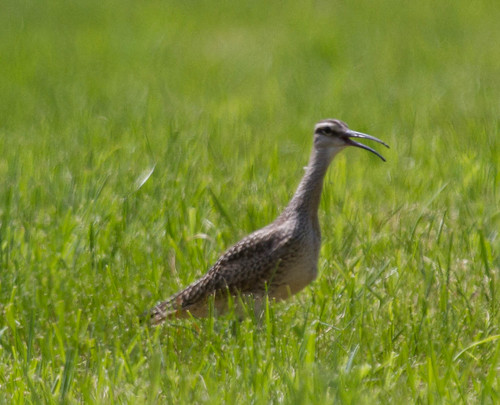 Including the Whimbrel, which was catching lots and lots of stuff (grasshoppers and crickets presumably).

Great show as it ran around feeding and flew in closer at one point.

Although I did expect to see one in the county at some point, it certainly wasn’t on one of the nicest days of the year. In a freshly cut Farm Meadow wasn’t the place either, although it has been pointed out that the habitat isn’t quite as crazy as it seemed originally (and does anyone check the Hanscom runways?).