Up a little after 6 to be at the Bosque close to 7. We quickly loaded the car, then stopped at the gas station up the street for some breakfast. Ended up with prepackaged donuts, but good enough. 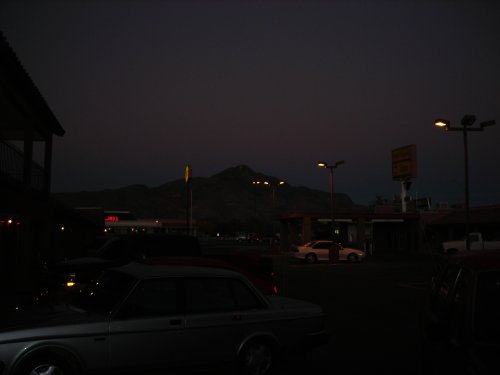 We got down to the Bosque by 7, but decided to drive up the road a little ways first. That wasn’t all that exciting, but we did get our first flickers and the only Loggerhead Shrike of the trip on the way back. We eventually stopped at one of the ponds along the road, and started working through several species of ducks. Lots of Redheads and a few Canvasbacks made up the big part of the flock, but there were quite a few other species as well.

We then entered the refuge proper (I was surprised that there was noone manning the gate at the busiest season, not that it mattered with my duck stamp) and went down to the Flight Deck. There were plenty of cranes, dabbling ducks (mostly Northern Shoveler), and quite a few coots. Once we walked out to the observation deck, we got a good look at an adult Bald Eagle sitting above everything. 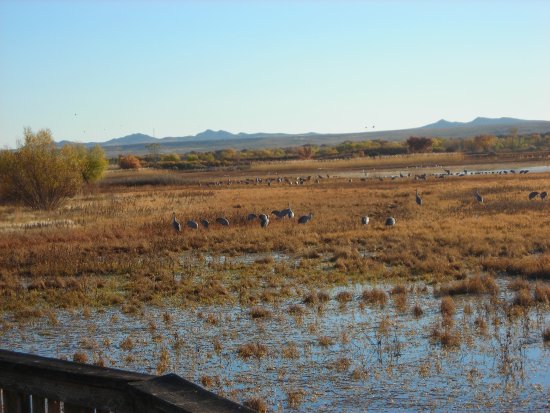 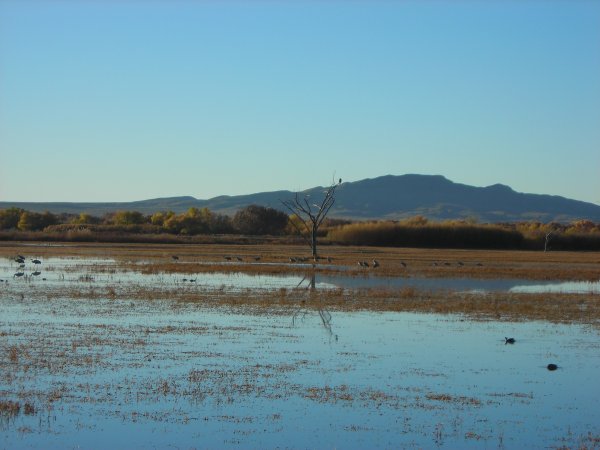 After the Flight Deck, we turned around and started for the Marsh Loop, first stopped as several Western Meadowlarks flushed off to the side.

We stopped at each of the ponds along the beginning of the loop, picking up more ducks and a few other birds including a Merlin, a Bonaparte’s Gull and a Say’s Phoebe (the first one I’ve actually seen well.)

At the Lagoon, we got out and walked. Across the boardwalk, we saw many coots and Pied-billed Grebe. There were also lots of Aechmorphus grebes, although I wasn’t completely convinced that they were Western. About halfway down the boardwalk, a male Yellow-headed Blackbird flew over, my first lifer of the trip. I would have liked a longer and better view, but it was pretty unmistakable. 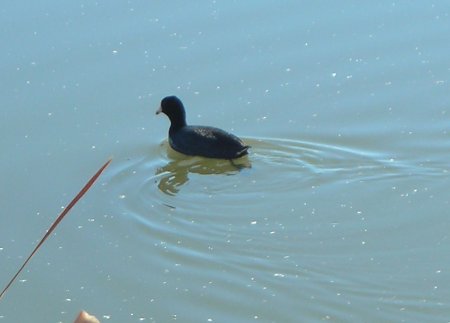 We took a brief walk up the hill beyond the lagoon and ended up chasing some small birds around for a while. One was a Bewick’s Wren (only one of the trip), but the rest didn’t want to cooperate. There were also a few lizards around.

Before we got back in the car, we walked along the front of the lagoon a bit, getting better looks at the ducks (ring-necks and redhead mostly) and grebes. A Clark’s came up very close, which was enough to confirm that at least some of the others were Western, life bird #2. We also had a very cooperative Black Phoebe and a couple Orange Sulphurs. 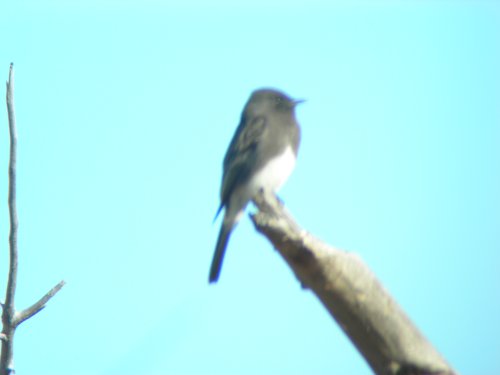 I stopped at the portapotty, but upon seeing the rather large wasp walking around the seat, I decided I could wait.

We continued around and saw lots more of the same. Lots of dabbling ducks, mostly shoveler and pintail. At the trails, we started to walk and people returning warned us about the mosquitoes. We kept going anyway.

That may have been a mistake as they were quite bad (I should have snapped a couple shots of Ethan’s back entirely covered). The birding was slow here (it was probably 10:30) with a few flyby cranes and lots of juncos (mostly Gray-headed with some Oregon). The butterflying was quite good and there were a few Variegated Meadowhawks flying around (although they didn’t cooperate very much for the camera). I ended up with 8 species of butterflies here: Cabbage White, Clouded Sulphur, Orange Sulphur, Ceraunus Blue, Western Pygmy-Blue, Common Buckeye, Monarch, and Common/White Checkered-Skipper. 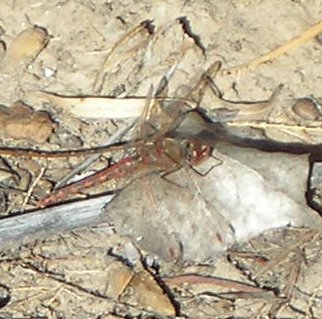 We then joined the Farm Loop, where we promptly saw 3 coyotes (no pictures unfortuantely). At the various lookouts, we got more than enough views of cranes. One had a small group of Mule Deer and some photographers that told us where the best spots for the evening flight would be. 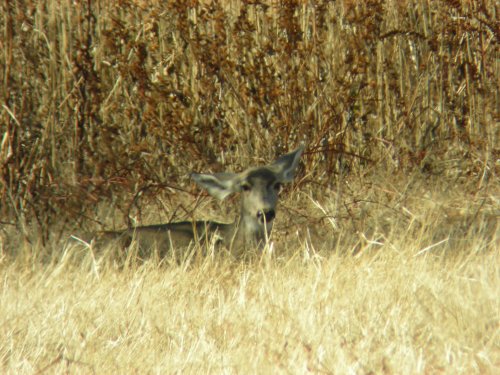 Around the bend we found those fields. There were already several hundred cranes feeding. And, as we pulled over, a Prairie Falcon was circling overhead. After getting a brief look to confirm, I grabbed the camera and hopped out. It apparently had flown off in the meantime and given that everyone else pulled was staring at the cranes through a camera, I didn’t even bother asking where it went. 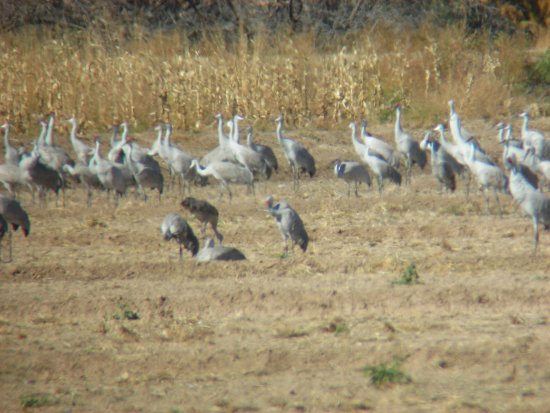 We enjoyed the cranes for a while, along with Southern Dogface that was fluttering around the car, and then finished the loop. Back at the flight deck were incredible numbers of Snow Geese. I picked out a few smaller-looking birds but couldn’t say for sure any were Ross’s. On the other side, where the meadowlarks were earlier, a Cattle Egret was working. 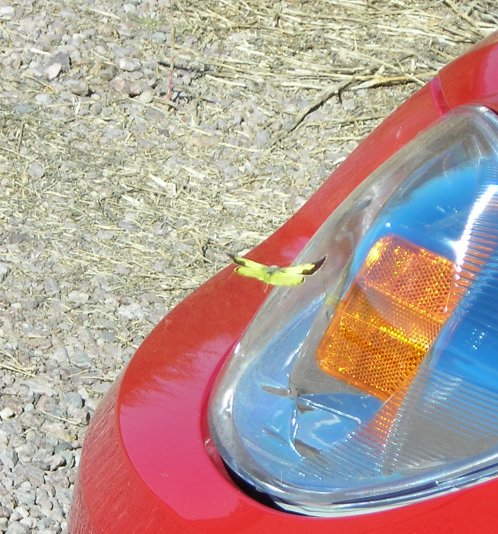 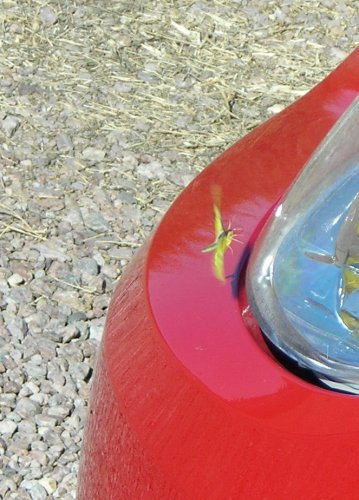 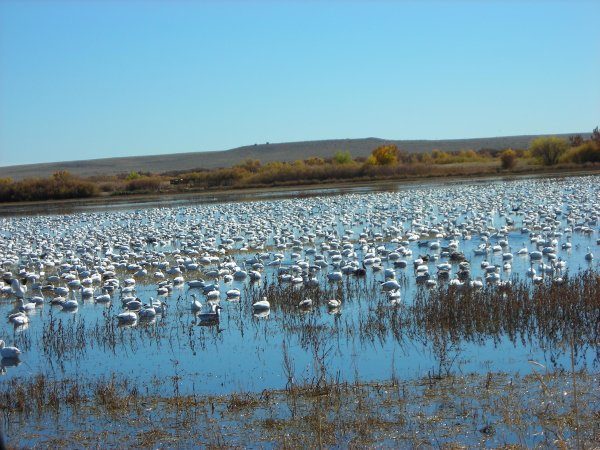 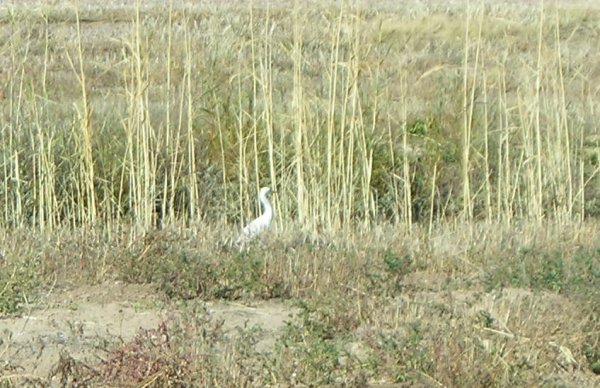 After finishing the loop, we hit the visitor’s center and gift shop. At the feeders was a Spotted Towhee and not much else. We decided to eat lunch at the picnic tables. While carrying the cooler over, a sapsucker flew into the trees right at the doorway. Unfortunately, it disappeared by the time I put the food down and ran back.

We ate and I then wandered around the parking lot while Ethan read the paper. There wasn’t too much around, mostly White-crowned Sparrows, but I did find a single Verdin, as well as some type of Lady (butterfly) and a Common Green Darner.

Walking back to the car, I added a Sleepy Orange and got a nice shot of a grasshopper. 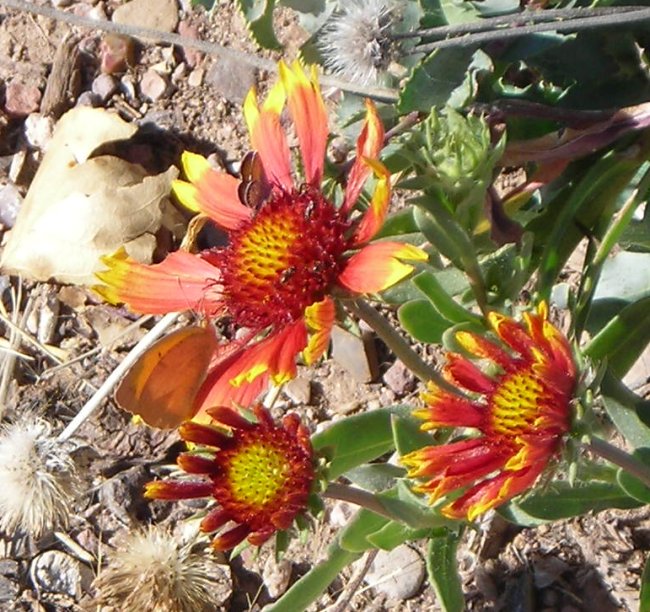 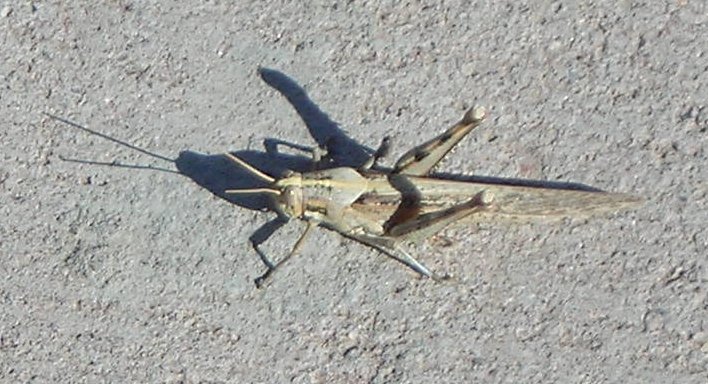 We worked our way around the Farm Loop again, getting ready for the evening flight. First, however, we stopped at the flight deck again, so I could get my Menotomy shirt pic. 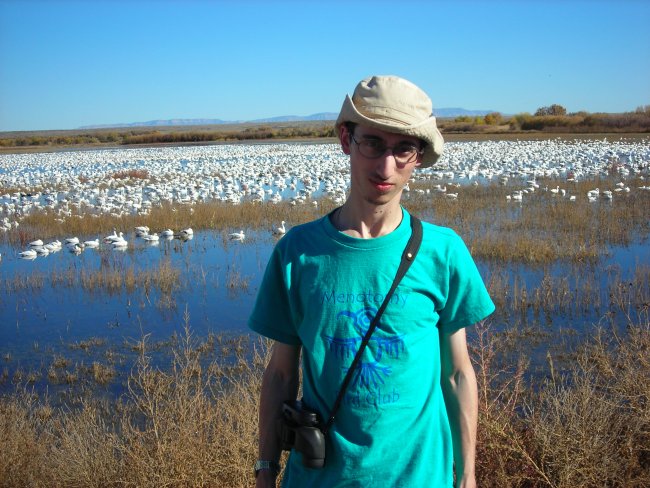 We made a couple stops on the way to the fields, picking up another eagle and a definite Painted Lady, but nothing too exciting. A perched Buteo had us going for a few minutes, but unable to find any reason for it not to be a Red-tail, we kept going. At the fields, we just sat back and waited. Lots of cranes with blackbirds, crows, pipits, and mourning doves mixed in. I tried to find some Brewer’s Blackbirds in the flock but couldn’t find any I was confident about.

Eventually, the geese started coming in. 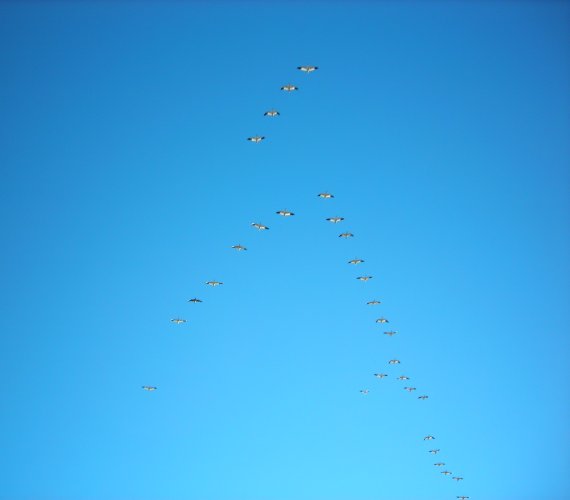 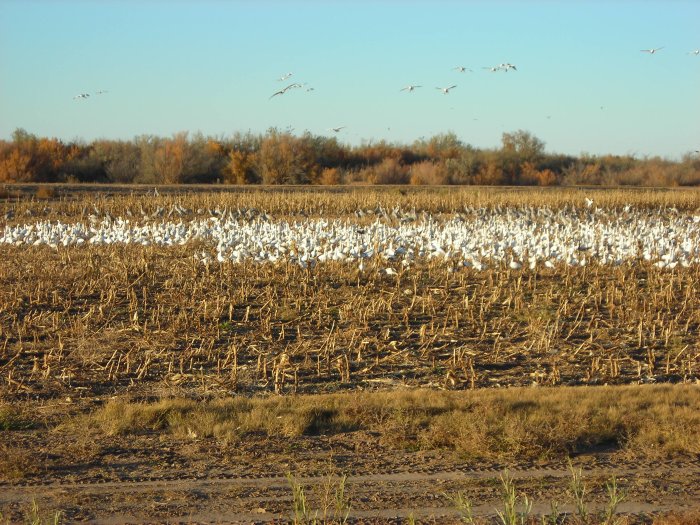 Scanning through with the scope, I found the stubby, warty bill of a Ross’s (life bird #4 on the day) but didn’t find the bird to go with it. I did eventually find another, but it took some effort.

The noise was spectacular, we were calling people and just holding up the phones. I’m not going to attempt to describe the experience in words, just will say that it’s something that everyone should do at least once in their life.

Finally, a little after 5 (probably close to 2 hours at the fields), the bugs started getting to be too much so we headed off for the night. Quite a day.

Back at the hotel, we just went to the El Camino. I got the chicken-fried steak, which was quite good. Still waiting for the soup that came with the meal though.

Ethan wanted to send a postcard to a friend, so we went to the gas station to get one. Not only did they not stock any, but the clerk and his friend didn’t seem to know what they were. We went across the street, where not only did they have some, but they gave us detailed directions to the post office and probably would have given us a stamp if they had one.

Daily totals: 59 species (including 4 life and 30 for New Mexico, along with Goldfinch sp, and Sapsucker sp). Also 11 butterflies (5 new) and 2 dragonflies (1 new)