Today was a bit limited by the fact that Enterprise closed at 2. We got up and were out a little after 7, first stopping at Einstein’s Bagels. We started our way up towards Sandia Crest.

Our first stop was Three Gun Spring Canyon. We found a few birds in the housing development on the way in, but nothing interesting. Walking up the trail, we quickly found a few Western Scrub-Jays, along with a Curve-billed Thrasher, Bushtits, Ruby-crowned Kinglets, and more juncos. 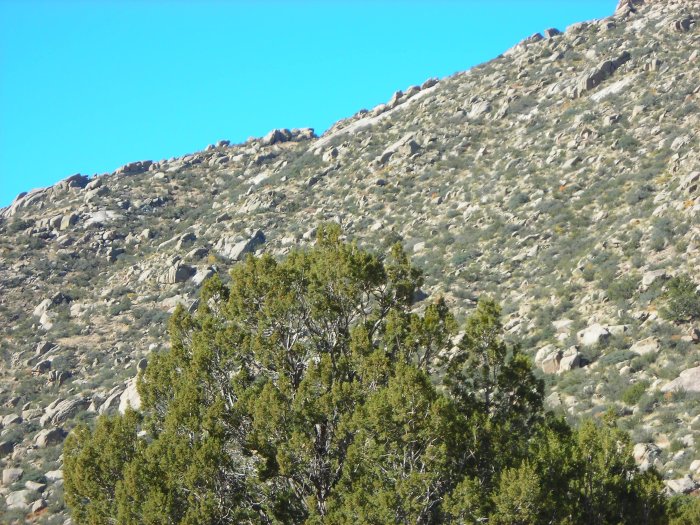 Further up the canyon, we found a few more good birds and lots of spectacular scenery. The bird highlights included a Crissal Thrasher (lifer #6), a couple Canyon Towhees, and a quick view of Western Bluebirds.

I wish I took a photo, but there was a sign telling us that hang gliding wasn’t allowed in the middle. On our way back, we took a different trail and ended up back on the road below the parking lot somehow. A few White-crowned Sparrows were about it for down there.

We then started for Sandia Crest. Quite a nice ride on the highway before reaching the road to the crest. Last time out here, we had gone to Cienega Canyon at the start of the road up, so I hadn’t really been on the road.

The road up is fairly good for winding mountain roads. Apparently no major storms yet as there were only a couple small spots of snow off to the side. Several fairly spectacular views but nothing more than a couple of juncos and robins.

At the top, we parked in the upper lot. Another birder was just about to leave, so we talked to him and got a few details. Walked over to pay and found out it was free for the holiday weekend.

Ethan’s camera had stopped working, so he went to the gift shop to try new batteries. I walked up to take a look at the view, which was truly spectacular. Ethan came out with new batteries and a camera that still wouldn’t turn on. I headed down to the feeders while he went to take in the view. 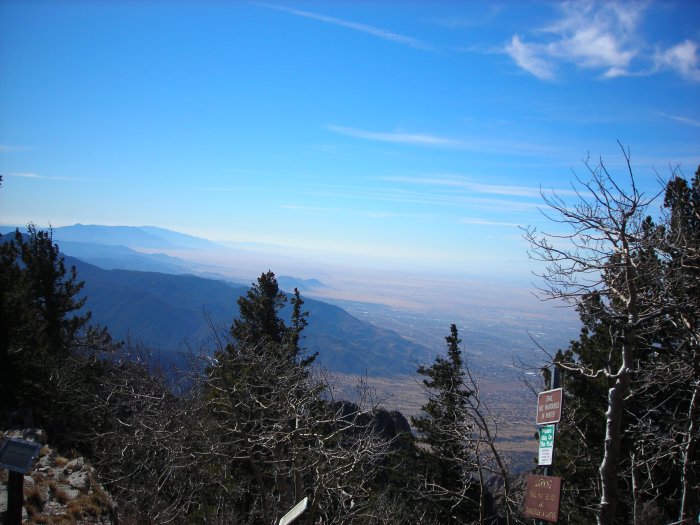 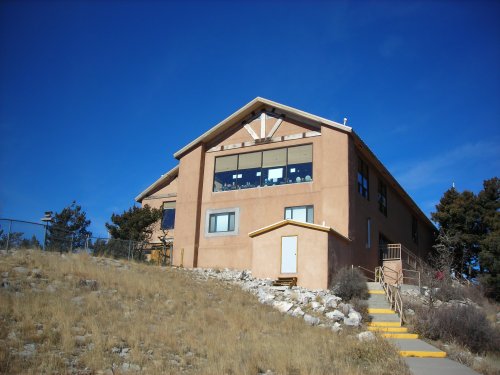 A couple Rosy-Finches appeared and took off very quickly, good enough to say I saw some, but not what I was hoping for. I stood down at the base of the stairs and waited. Ethan came down and shortly after, a large flock flew in. I managed a few blurry shots before they took off again. 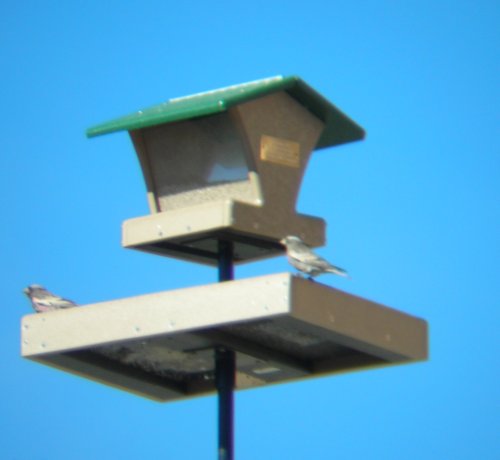 We decided it would be worth getting the scope, so Ethan went for the car. Forgetting Sandia Crest is at almost 11,000 feet, he ran up the stairs and almost had heart attack #2. The flock made another pass while he was gone and a Steller’s Jay flew over as well.

As soon as the scope was set up, the birds decided to leave for a while. We were entertained by lots of ravens high overhead and of course the views all around were still spectacular. Ethan decided to go check out the trail that lots of people were walking, and as he left a Clark’s Nutcracker flew over (life bird #8).

Eventually both Ethan and the finches returned. The wind had picked up a bit by now, so once they left again, we packed up and went to the gift shop for finch apparel and then the long drive back down.

Rest of the day

That basically ended the birding, although there were a couple White-winged Doves flying around.

We stopped at Ethan’s to drop off all our stuff before we returned the car. As we were about to go, his neighbors, Juan and Mary, came out. They were about to take their dogs out for a walk, but offered to take us out for lunch and then drop us off. We quickly agreed and headed to return the car.

At Enterprise, we dropped off the car. The Accounts Manager asked us if there was anything we thought could be done better. Ethan asked for a drop box or later hours. She said that wasn’t possible because of their location on the grounds of a dealership and gave him a 10% off coupon for his next rental.

We hopped in with Juan, Mary, Jack, and Cholito, which proved interesting as the dogs really liked to lick us and look out the window. They were planning on a cafe nearby, but it was closed. After debating a few options, they decided to bring us to Barelas Coffee House, which was basically a Mexican diner. The place was packed when we walked in (probably about 2PM) and we had to wait a little while for seats. It was well worth it, as the food was by far the best we had. Ethan and I both had chicken enchilladas, Juan and Mary split 3 burritos (the waitress gave Juan’s to Mary by mistake and she ate half before they realized).

After eating, we decided that we wanted to crash, so they dropped us off at the house and invited us for soup for dinner. We crashed for awhile, then did most of our packing.

We eventually went over to Juan and Mary’s and watched them prepare the soup. I have no idea what was in it, but it smelled delicious. Mary also was making a tea that smelled as good. Juan talked to us about the course on inventing that he was taking at work.

Eventually we sat down and ate. There was the soup, some sort of yogurt/tofu mush, and some rice. Apparently the Mexican (Bolivian?) way is to put the stuff on the plate, take a bite, have a bit of soup from the side, and go back and forth. Everything was quite tasty, although rather different.

We sat around for quite a while talking. Juan was telling us about his work at the Intel factory and Mary was talking about her teaching and how she’s about to go back for her master’s. They’re very interesting people, but eventually we needed to get back and go to bed.

We finished packing and got to bed. Up early the next morning, the taxi got to the house a few minutes ahead of time. Both flights were on time, even with lousy weather in Hartford. The bags came off the baggage claim quite wet but that was the worst of it. Stepped outside and almost immediately caught the shuttle back to the hotel and back home we went.