The Greater Boston Christmas Bird Count was last Sunday, December 17th. The Waltham section had a great day, tallying 49 species and helping to add Turkey Vulture to the cumulative count total (Newton had a few more than us).

I started at 5:30 by heading out for owling with my mother. Two steps out the door, she said “is that a screech-owl I’m hearing?” Only the second one we’ve heard from the yard. I debated about trying to call it in, but decided to try later and go for more now.

We headed to the Paine Estate and walked in from the high school side. Stopping every few feet to play recordings, we had no luck. Getting close to the house, we finally turned back. A few feet back and we were able to hear a distant screech-owl.

Back at the car, we first walked down the hill a bit to check the pines between the high school and middle school and were rewarded with a Great Horned calling from the other side of the high school. Quite the start, although we had no luck at our next two stops and the yard one had shut up by the time we got back.

We picked up my father and then headed to Dunkin’ Donuts to meet up with the rest of our group. It took a few minutes to get everyone there, but we were ready to go by a little after 7. And we had some birds as there were plenty of gulls, crows, pigeons, and starlings around. Eric pointed off in the other direction and said “Raptor!” A Cooper’s Hawk had stopped on a dead tree. A very good start for everyone.

We headed over to Dunback, with targets of Long-eared Owl, Baltimore Oriole, and Blue-headed Vireo. I found the Long-eared pretty quickly but we couldn’t find the other targets (the Lexington group that covers the other half of Dunback did though) and didn’t have any other owls or much else. After checking the pines and gardens, we started back and got a very quick flash of a small hawk. Nothing other than Sharpie was really possible, but it wasn’t quite enough to count.

My parents and Barbara Howell headed off to look for Turkeys and to work Beaver St. The remaining group (me, Eric, Christine King, and Lew Bushnell) worked our way out a bit more slowly. We ran into Paul Roberts, who had a sharpie, so that did get added in. Reaching the parking lot, we heard crows making a racket beside the school and wandered over. At first we didn’t see what they were squawking at, but did find the Hairy Woodpecker that was calling. Moving around to get a better view, we noticed a Red-tail perched quietly. The crows did have something after all.

We moved on to Hardy Pond, where we found several good birds including 3 coots, many Common and Hooded Mergansers, and 2 Great Blue Herons. The best bird was a grackle, only the second I’ve had on the count (almost too bad that the count total was over 600 this year).

Our next stop was the Lot 1 area. Church was just getting out, which made getting in a bit tough. It had also clouded up and there was very little activity in the field. We did have a Great Blue Heron fly over, presumably off the pond nearby. Lots of robins and starlings were taking off and a few jays started screeching at the pines. We circled around to the trail to go over to the pines, getting slightly distracted by a bunch of white-throats and a Carolina Wren. At the pines, we didn’t find anything the jays would be on, but did flush 2 rabbits.

We then went to the back field, where a red-tail flushed from just beyond the pines. A second one joined it almost immediately, so the jays weren’t just fooling around. We then went over to the pond, finding close to 10 cardinals on the way. Three more Hooded Mergansers on the pond, but no heron.

Running a bit behind schedule, we headed over to the new section of Beaver Brook, on the former Met State property. A few feet into the woods, Christine spotted a “small red-streaked bird.” That description had me a bit baffled, but it made more sense once bird was replaced with hawk. It was a fairly distant view and the bird faced us the whole time, so we struggled a bit with the id before finally settling on another Cooper’s.

For me, the highlights of the day came came next. We reached the main trail and Eric said, “boy that’s a funny looking robin.” A few seconds later and we realized that it wasn’t a robin, but an Eastern Bluebird. In fact, there were two, a male and a female. My first for Waltham, and definitely a bird that I’ve been trying to find for quite a while now. 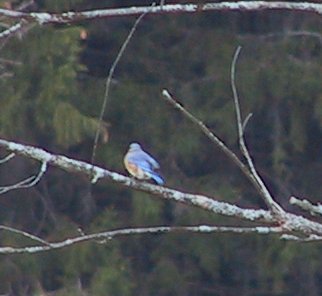 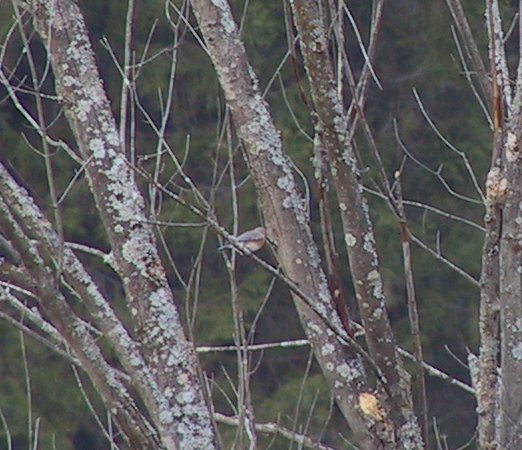 We continued around and made the short loop. Two flickers and a minimum of 50 Mourning Doves were good. Although we were supposed to meet the rest of the group at noon for lunch, we were back at the bluebird spot at 11:50. Our first flock of juncos was working through. I looked down at the marsh and saw a good-sized mammal and said “Muskrat down there.”

The rest of the group got on it and we quickly realized that it was no muskrat. We initially thought otter and quickly moved on to fisher, although still not sure. It started grappling with something and we could see that it was locked onto what did appear to be a muskrat! It soon noticed us and stopped moving as much. I got a little closer for a couple marginal pictures: 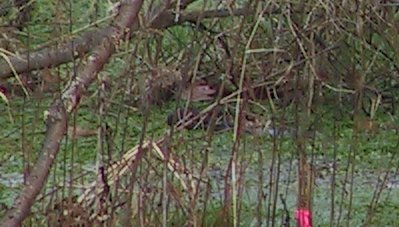 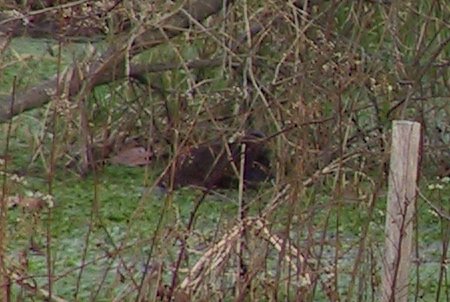 A life mammal and quite the way to see one. Well late for lunch, but that was not a problem.

We quickly hurried over to Wendy’s, where we met up with the rest of the group and Judy Marino, who had spent the morning at Prospect Hill with Nancy Hammond. They hadn’t had a great morning, but did find our only Creeper and Red-bellied Woodpecker, so it was well worth it.

The Beaver St. crew had fewer birds than us, but some equally good sightings. At the Paine Estate, they wandered around with almost nothing for a while and then heard a large group of crows. Running over, they found a Great Horned Owl. They had one there last year too. I walk through between one and three lunch breaks a week and still haven’t seen one there.

They then moved on to the UMass Field Station. Checking the community gardens, they found a male American Kestrel sitting on one of the posts. Moving on to Lyman Pond, they found lots of geese and mallards but no Wood Ducks. Checking the spot where we had a Great Blue Heron scouting the day before, there were several jays making another ruckus. At first it appeared to be over nothing, but my father kept looking and eventually noticed a screech-owl

After lunch, we went over to the Charles River where Chrstine immediately found this Red-tailed Hawk feasting on a squirrel: 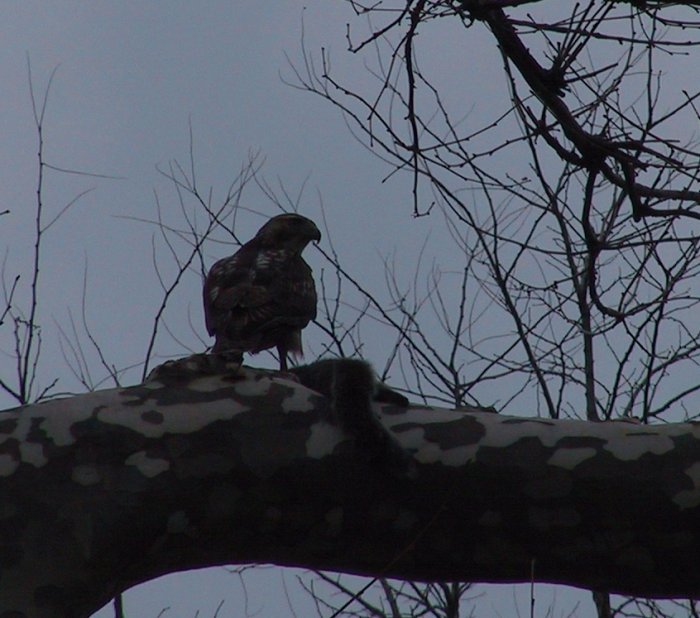 At the bridge, a Belted Kingfisher made several passes. There were a few good birds along the river, but it wasn’t great. A Red-winged Blackbird at the first bench was a nice surprise (my first CBC record). One Great Blue was in a usual spot and there were more mockingbirds than expected. We found the 3 Ring-necked Ducks that had been around, along with 5 Hooded Mergansers. On our way back, 7 Common Mergansers flew overhead. We couldn’t find a Fish Crow at all though (of course, when I went to lunch at the Asian restaurant there on Thursday there were at least 10).

We continued on to the Gore Estate. There were plenty of juncos near the house. Walking along the edge of the farm field, a large raptor appeared. A very nice Turkey Vulture passed right overhead, working straight to the north. Although we knew this was a good bird, we didn’t realize until the tally that today was the first time it had been recorded on the count.

At the far end, there were geese all over. I eventually counted 141 before noticing another raptor standing just beyond the edge of the flock. It looked fairly big but wasn’t a Red-tail. I started to move closer when a Red-tail buzzed in and chased it into the trees. CLearly an Accipiter, but I had to get quite close to assure myself it was just a Cooper’s and not a Goshawk.

It was getting a bit late, so we didn’t have that much time to go to that many more places. I decided that Hardy Pond was probably worth a second look and my parents went off to check for turkeys and another staked out screech-owl (no luck, but we found a message on the answering machine from the homeowners who did have the owl after).

On the way, we had another Great Blue Heron flying over the Beaver St. rotary. At Hardy Pond, there were Great Blue Herons everywhere! We confirmed at least 6 and I’m fairly sure that there were 7. All the other birds were still there, although we didn’t check the counts that carefully.

It was a great day. The Fish Crows or Wild Turkeys would have been nice (especially since that would have pushed us to 50 on the day) but we can’t complain too much. The team was great to bird with, everyone contributed a lot. It was especially nice to have enough people to split up and really cover a few more areas.

For those interested, I’ve put my tally sheet up.