Wednesday 10/28: Nothing unusual at Dunback.

Thursday 10/29: PB Grebe at Cambridge Res, goldeneye at Flint’s about the most exciting stuff on a pond circuit.

Friday 10/30: 3 Pied-billed Grebes on the river at Purgatory Cove. Four turkeys, a Rusty Blackbird, and an overdue patch tick White-crowned Sparrow at the landfill plus a Winter Wren at the pumphouse. 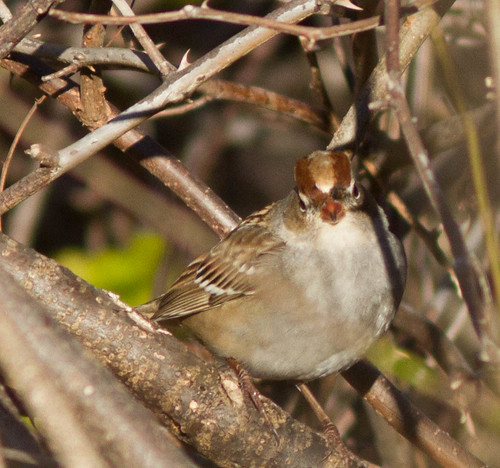 Saturday 10/31: Started at Danehy, nothing terribly exciting there or at Alewife. Fresh Pond had no open spots along Huron and none at the duck ponds either(!). More or less the usual at the res, although a Killdeer and GB Heron fishing at the southern end were interesting. Lots of Common Mergansers and Ring-billed Gulls at Hobbs Brook. Nice Vesper Sparrow at Waltham St.

Sunday 11/1: Lots of ducks at the res but too far out. Eagle scared the mergansers at Hobbs Brook. Rusty Blackbirds and little else at Great Meadows. Ruddies at Flint’s and found the yellowlegs along Old County Rd on a second pass. Usual ducks at Arlington Res, work going on a Busa so I didn’t spend much time there. Vesper still at Waltham St with a ton of blackbirds. Great Horned Owl and Winter Wren about it at Dunback.

Monday 11/2: Nothing much at Rock Meadow and nothing at all at the duck ponds.