Wednesday 10/4: Went to Rock Meadow. No luck with Anna’s Dickcissel but a Yellow Warbler was my first in October and a Grasshopper Sparrow was patch #168. Two ravens over the Pike later. 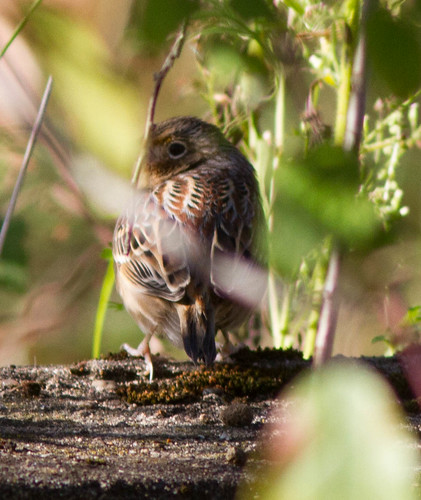 Thursday 10/5: White-crowned and other sparrows at Round Hill.

Friday 10/6: Couldn’t find the Clay-colored at Arlington Res but another White-crowned or 3 and a flyover pipit were nice. About 13 Ruddies on the res on the way home.

Saturday 10/7: Started with the MBC walk at Waltham St. Dickcissel, Clay-colored, and adult White-crowned were nice but the rail and vireo that got away would have made things better. Continued to Hobbs Brook where I finally got the Pec and there were lots of Yellow-rumps. Tried Hanscom, couldn’t find anything new for Bedford.

Sunday 10/8: Plymouth run. Had hopes of a big set of county additions but the forecast got worse. Figured I’d have a few hours before the rain but didn’t count on the wind. Gannets, lots of Laughing Gulls and Tree Swallows, and not much else at Ellisville Harbor. Great Herring Pond had boats and no birds. Manomet Point had wind but from inside the car I got Cory’s and Great Shearwaters along with lots more gulls, gannets, and cormorants before the rain hit. Nothing at Nelson Field in the downpour. Figured it might be over by the time I got to Cumberland Farms but it picked up again right as I arrived, so I bailed and checked Hobbs Brook, which was essentially the same as Saturday.

Monday 10/9: Went to Great Meadows to see if anything came in on the storm. Did get first of fall harrier and pintail, plus a White-crowned and the Clay-colored but not a whole lot else.

Tuesday 10/10: Finally got a towhee in Wayland at Heard Farm, not a whole lot else (Slender Spreadwing and Slaty Skimmer were nice too actually). Ran out at lunch for the Brant at Farm Pond.