Wednesday 6/19: Finally got the commute SRV Indigo Bunting at Sedge Meadow but not much else.

Thursday 6/20: Was pretty quiet at Forest Grove but as I was getting back to the car, lots of birds (Wood Thrush, nuthatch, couple chickadees, several robins, grackles, etc) were going nuts. Finally tracked it down to be a screech-owl, a nice overdue patch bird. 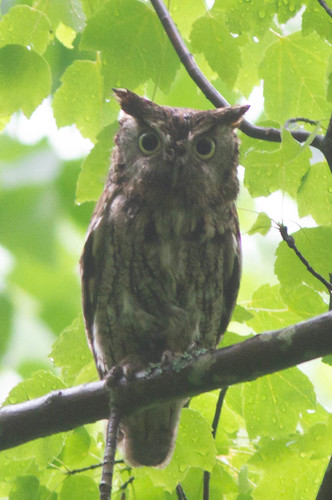 Friday 6/21: Ended up checking Knox Trail (no Ring-neck) and School St (Savannah I needed for second half of June).

Saturday 6/22: Pileated and not too much else at Prospect Hill. Got Jeff’s Ruddy at Winter Pond then a quick check of the Mystic Lakes and Meadowbrook without much.

Sunday 6/23: Did a speculative dragonfly trip combined with some town listing. Started in Dracut, where I had about 20 species (increasing that list from 1). Continued to the Lowell-Tyngsborough-Dracut State Forest, which was pretty nice. Nothing too exciting but most of the expected birds beyond thrushes and a few odes. Then did the speculative search for Cobra Clubtails along the Merrimack. No luck with that but a Common Buckeye at Sheehy Park and a few other things elsewhere. Worked towards Tyngsborough but didn’t find any river access there, so took 4 south. Had a Broad-wing fly over the Billerica Great Meadows unit, then stopped at Fawn Lake. Lots of bluets but the big bug was a bright red darner that buzzed across the pond then went up and out. Had to be a Comet but I really wish I had longer views.

Monday 6/24: BBN had a BB Cuckoo and a Red-shoulder plus FOY meadowhawk and spinylegs.

Tuesday 6/25: Nothing too exciting at Meriam’s Corner. Spotted Sandpiper, Great Crested Flycatcher, and Scarlet Tanager were new for me there but fully expected.